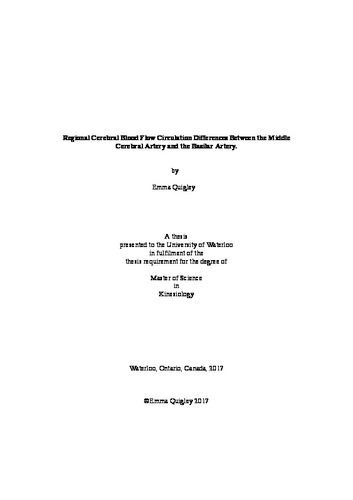 Much of the research that has investigated cerebral circulation has used the MCA and has assumed that it is an indicator of what is happening in all regions of the brain. Yet little research exists to validate this notion. Recent research has suggested that the regulation of the circulation in the frontal region of the brain is different from that in the posterior region in that reactivity is higher in the front brain. To further explore this idea, transcranial Doppler ultrasound was used to measure cerebral blood flow velocity in the middle cerebral artery (MCA), which supplies much of the frontal region of the brain, and the basilar artery (BA), which supplies the posterior region. Conditions imposed alterations in end-tidal PCO2 (PETCO2) and in arterial blood pressure at the brain by sit-to-stand and tilt transitions. The hypotheses were that the MCA would be more reactive and have greater changes in relative velocity during changes in PETCO2, the relative BA velocity would change less in both passive and active posture changes, and the cerebrovascular resistance would be higher in the BA during blood pressure changes. Main findings include significantly different cerebrovascular reactivity between the two arteries which only existed when the data were expressed as absolute changes in velocity per change in mmHg of CO2. When expressed as a relative change, there was a trend for the BA to have a higher reactivity (p=0.082), but this was not significant from the MCA, and this goes against the first hypothesis of this thesis, which was that the MCA would be more reactive than the BA. In the trial which included a hyperventilation followed by a stand and breath hold, it was observed that there was a significantly different change in velocity at the stand nadir between the MCA and the BA (MCA: -41.37 ± 12.08% BA: -51.21 ± 18.35%, p=0.015). This suggests that the BA had greater changes in velocity than the MCA when there was both a change in blood pressure and a change in PETCO2. Smaller changes in velocity in the MCA imply superior autoregulation, contrary to both the third and fourth hypotheses of this thesis which state that active and passive posture change will result in a greater change in the MCA relative velocity. During hyperventilation trials when blood pressure decreased during hyperventilation, CVRi was higher in the BA than in the MCA. This was also evidenced in the interaction trial including both hyperventilation and stand. Although, the stand itself did not evoke this significant difference, the change in CO2 combined with a stand resulted in the significant differences between the arteries. This suggested the downstream arterioles of the BA are more resistive than those of the MCA and this aligns with the fifth hypothesis of this thesis.