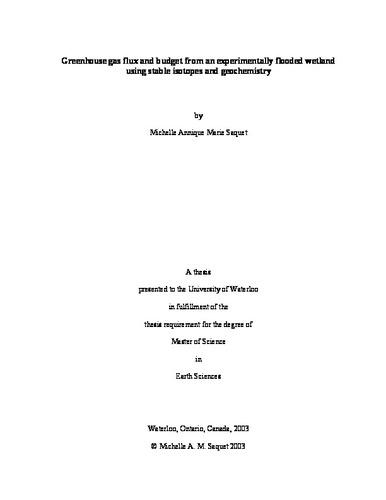 A boreal forest wetland (L979) was flooded in 1993 at the Experimental Lakes Area, Ontario to imitate a hydroelectric reservoir and to study the effects of flooding on greenhouse gas production and emission. Flooding initially caused CO&#8322; and CH4 emission rates to increase and changed the wetland from a small, natural carbon sink to a large source of carbon. The increased production of greenhouse gases in the peatland also caused the majority of the peat to float to the surface creating floating peat islands, within 4 years of flooding. The floating peat islands are a larger source than the central pond of CH4 to the atmosphere due to the high water table and small oxidation zone as compared to the earlier undisturbed peatland. The floating peat islands had an average flux of 202 ± 66 mg C-CH4/m²/day comparable to rates measured in 1995. Methane flux rates are spatially and temporally variable ranging from ?117 to 3430 mg C-CH4/m²/day. The variability is partly due to episodic releases of gas bubbles and changes in overlying pressure from the water table. The development of floating peat islands created an underlying water pocket. The water pocket increased water movement between the central pond and the peatland and led to increased peat temperatures and methane oxidation, and removal of debris from the water pocket. DIC, CH4, and O&#8322; concentrations, and &#948;13C-DIC, &#948;13-CH4, and &#948;18O-O&#8322; values in the water pocket were similar to values in the central pond. Before flooding, the &#948;13C-CH4 values from the peatland ranged between ?36 and ?72? indicating that about 65 to 90% of the methane was oxidized before flooding. After flooding, the median &#948;13C-CH4 value from the floating peat islands was ?52? indicating that about 30% of the methane was oxidized before it was emitted to the atmosphere. Since the floating islands are now vegetated, photosynthesis and transport via plants allow the movement of oxygen into the peat islands Methane oxidation in the central pond was similar in 2001 and 2002. DIC and CH4 isotope mass budgets from June 3 to September 23, 2002 indicate that inputs were smaller than outputs at L979. Calculated net DIC and CH4 production in the central pond was 8490 and 432 kg C, with &#948;13C-DIC of -18. 5 ? and &#948;13C-CH4 of -32. 5?. Decomposition of peat was the source of DIC and CH4. O&#8322; saturation levels indicate that the pond is always undersaturated and that respiration dominates the system; however, the &#948;18O-O&#8322; also indicates that photosynthesis is an important process in the central pond of L979. The peat islands contributed about 90% of the total CH4 flux, whereas the open water areas contributed 10%. This indicates that formation of peat islands in a hydroelectric area can significantly affect the greenhouse gas emissions to the atmosphere. The average flux of CH4 from the entire wetland in 2002 was 202 ± 77 mg C-CH4/m²/day, equivalent to 44 ± 17 g C-CH4/m²/year (year = 220 days). This is higher than preflood values of 0. 5 g C-CH4/m²/year in 1992, and the early post-flood value of 8. 9 g C-CH4/m²/year in 1993/1994. The wetland continues to emit methane after ten years of flooding at higher than preflood rates.