The Counterpublic of Union Station; An Alternative Future of Toronto's Transit Terminal 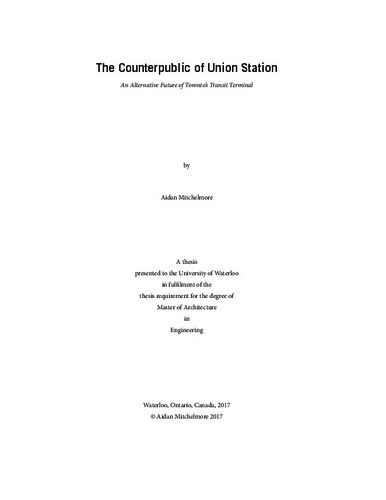 Though Toronto’s public spaces were conceived as spaces of discourse engendering democratic participation, today we witness their degradation into platforms of consumption. Contemporary Capitalist forces engulf the city’s public realm, transforming its space into a mechanism of consumption and profit. Seen clearly in the glorification of such commercialized neighborhoods as Yorkville and Queen St. West, businesses have adopted invasive marketing strategies that use the promise of culture, experience, and safety to mask their profit-oriented objectives. This abandonment of the public realm by the City of Toronto is seen clearly in recent plans for Union Station, the city’s central transit hub that is currently undergoing a large-scale revitalization. Since its creation, Union has operated as a physical and symbolic gateway to the city. Today, following decades of neglect, it is the recipient of a near billion-dollar investment to modernize its transportation infrastructure, and restore the heritage value of the building. In 2004, an extensive Master Plan outlined urban design principles for this revitalization, which privileged pedestrian use and experience. But enticed by the possibility of a self-financed revitalization, the City has since endorsed and approved the construction of over 160 thousand square feet of new retail space as part of its vision, prioritizing the Station’s profitability over the 2004 Master Plan’s public-oriented vision. To realize these plans, a Head Lessee Agreement was awarded to Osmington Inc., which granted full control over the Station’s retail spaces and the exclusive right to profit from Union’s existing space. In doing so, the City has paid a high price for Union’s revitalization, undermining its ability to continue serving as one of Canada’s most celebrated public spaces. This thesis proposes an alternative future for Toronto’s Union Station, imagining a Station that not only reflects the original ambitions of the 2004 Master Plan, but also challenges our expectations of urban public space. It imagines a second renovation to the Station with the ambitions of re-publicizing and re-politicizing this cultural landmark, accommodating a diverse range of architectural programs to attract a widened range of publics into the Station. As a foil to the eating and shopping amenities introduced by the current renovation, this thesis proposes the addition of public programs such as a public library, a resource centre, gathering spaces, a shelter for the homeless and generous versatile public spaces, with the aim of accommodating a range of common activities – gatherings, confrontations, performances, discussions, protests, celebrations, amongst other diverse social encounters. This design is a polemical proposal situated within existing legal, financial, and architectural frameworks; it remains self-aware of the realistic limitations put forth by the City of Toronto, the politics surrounding the revitalization project, and the logistical constraints of building in an infrastructural hub. However, engaging with the work on Athenian democratic spaces by Richard Sennett in Spaces of Democracy and Michael Warner’s Publics and Counterpublics, this thesis looks to reveal how the confrontation of difference is fundamental to democratic exchange, and the way by which a diversity of uses within the Station remains critical to its re-politicization. Specifically, though spatial and programmatic reconceptions of the Agora, Stoa, and Pnyx political typologies, the thesis suggests an architecture of proximity, adjacency, visibility, privacy, publicity, and counterpublicity. The resulting design proposes a dense network of reinterpreted typologies that form a social landscape interwoven into the commercialized transit hub. Through a typological and topological reading of the proposal, we may explore an alternative future of Toronto’s Union Station, while questioning how architecture can foster a more diverse democratic society.