The Role of Restaurants in an Evolving Mid-Size City 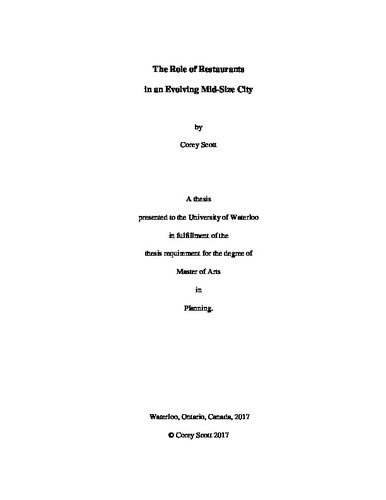 Mid-sized Canadian cities are witnessing a fundamental shift in the way their downtowns are being utilized and in the role their downtowns play in the broader urban context. These cities (populations 50,000-500,000) have begun witnessing similar shifts in urban dynamics and urban form that have been noted extensively in larger metropolitan areas such as Toronto, Vancouver, Montreal, New York City, Chicago, and Los Angeles. The purpose of this research is to address the changes in consumption patterns in a mid-sized city’s downtown and examine the broader implications these changes have on urban form and dynamics as well as the local economy. A case study of Kelowna, British Columbia is used to examine trends surrounding amenity-based consumption in the city’s downtown. The primary lens through which amenity-based consumption is understood is through the food-services sub-sector. Additionally, inter-industry linkages are explored to determine the extent to which service-based economic activity in the mid-sized city’s downtown impacts other local and regional industries that may not be overtly present within the downtown. Both quantitative and qualitative research methods are used to examine the city’s local industry concentrations and their impacts on the urban core. The research utilizes an industry concentration analysis to determine the size and importance of specific amenity-related industries in Kelowna. Next, open-ended interviews with the city’s culinary and planning and development communities are conducted to further explore the impacts of food-related industries on the downtown as well as the role that a locally-unique food culture has played in urban development. The study concludes that the role of the restaurant in the downtown has changed substantially in recent decades. The restaurant generates activity in multiple ways through the consumption of the local production landscape by both residents and tourists. Highly concentrated industries surrounding food production and cultural amenities have benefitted from increasing exposure to food in our everyday environments through both traditional media and social media depictions of food culture. While not all mid-size Canadian cities will be able to benefit from these recent transformations, the research shows that those with highly concentrated amenity-related industries can stimulate urban development based on locally unique cultures, which, in the case of Kelowna, are centered around agricultural production and consumption. This research also identifies some of the more challenging problems associated with urban development that is based on culture-led regeneration and provides recommendations on how they can be accounted for and lessened in the City of Kelowna.