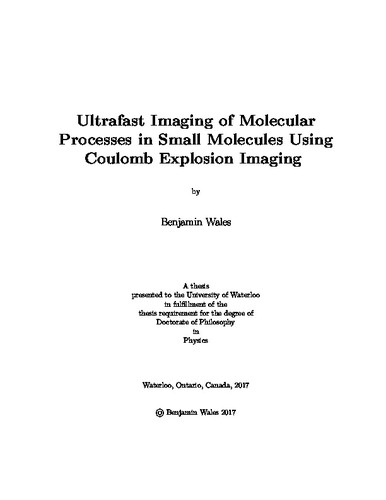 Molecular structure and dynamics of three molecules (carbonyl sulfide, acetylene, and ethylene) are examined using various implementations of the Coulomb Explosion Imaging technique. Soft x-rays from the Canadian Light Source synchrotron are used to ionize OCS doubly, triply, and quadruply. The structural changes and dynamics of the ionization processes and subsequent fragmentation processes are imaged through coincident measurements of ionic fragment momenta. Variations in these processes are explored as a function of photon energy from 90 eV to 173 eV, imaging structural changes as a result of fast (<1 fs) and slow (>1 fs) ionization processes. Fragmentation processes in OCS 3+ and OCS 4+ are also examined using short, intense, infrared laser pulses of variable pulse length (7 - 500 fs) at the Advanced Laser Light Source. Here, several sequential fragmentation pathways are observed along with pulse-length dependent bond stretching and bending. The extreme case of the latter is shown to open up a new fragmentation pathway for pulse lengths greater than 200 fs. Proton migration in both the acetylene (HC2H) and ethylene (H2C2H2) cations are imaged using a short pulse (32 and 40 fs) UV-IR pump-probe ionization scheme in order to access the excited cation states which lead to isomerization. For the acetylene molecule, the probe pulse removes two more electrons allowing us to map the momentum vectors of fragments in the channel CH+ + C+ + H+ as a function of time, and thus image the isomerization from HC2H+ into C2H2+. The isomer yield is shown to match theory. Similarly, isomerization of ethylene into ethylidene is imaged, measuring a peak isomerization yield at 100 fs.