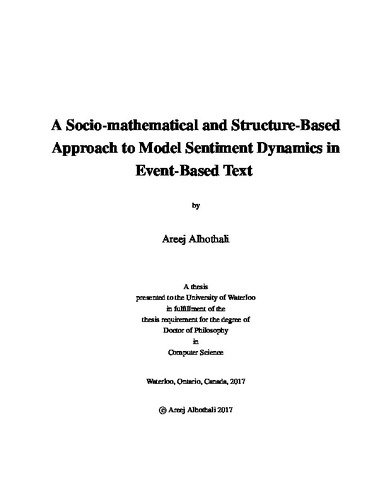 Natural language texts are often meant to express or impact the emotions of individuals. Recognizing the underlying emotions expressed in or triggered by textual content is essential if one is to arrive at an understanding of the full meaning that textual content conveys. Sentiment analysis (SA) researchers are becoming increasingly interested in investigating natural language processing techniques as well as emotion theory in order to detect, extract, and classify the sentiments that natural language text expresses. Most SA research is focused on the analysis of subjective documents from the writer’s perspective and their classification into categorical labels or sentiment polarity, in which text is associated with a descriptive label or a point on a continuum between two polarities. Researchers often perform sentiment or polarity classification tasks using machine learning (ML) techniques, sentiment lexicons, or hybrid-based approaches. Most ML methods rely on count-based word representations that fail to take word order into account. Despite the successful use of these flat word representations in topic-modelling problems, SA problems require a deeper understanding of sentence structure, since the entire meaning of words can be reversed through negations or word modifiers. On the other hand, approaches based on semantic lexicons are limited by the relatively small number of words they contain, which do not begin to embody the extensive and growing vocabulary on the Internet. The research presented in this thesis represents an effort to tackle the problem of sentiment analysis from a different viewpoint than those underlying current mainstream studies in this research area. A cross-disciplinary approach is proposed that incorporates affect control theory (ACT) into a structured model for determining the sentiment polarity of event-based articles from the perspectives of readers and interactants. A socio-mathematical theory, ACT provides valuable resources for handling interactions between words (event entities) and for predicting situational sentiments triggered by social events. ACT models human emotions arising from social event terms through the use of multidimensional representations that have been verified both empirically and theoretically. To model human emotions regarding textual content, the first step was to develop a fine-grained event extraction algorithm that extracts events and their entities from event-based textual information using semantic and syntactic parsing techniques. The results of the event extraction method were compared against a supervised learning approach on two human-coded corpora (a grammatically correct and a grammatically incorrect structured corpus). For both corpora, the semantic-syntactic event extraction method yielded a higher degree of accuracy than the supervised learning approach. The three-dimensional ACT lexicon was also augmented in a semi-supervised fashion using graph-based label propagation built from semantic and neural network word embeddings. The word embeddings were obtained through the training of commonly used count-based and neural-network-based algorithms on a single corpus, and each method was evaluated with respect to the reconstruction of a sentiment lexicon. The results show that, relative to other word embeddings and state-of-the-art methods, combining both semantic and neural word embeddings yielded the highest correlation scores and lowest error rates. Using the augmented lexicon and ACT mathematical equations, human emotions were modelled according to different levels of granularity (i.e., at the sentence and document levels). The initial stage involved the development of a proposed entity-based SA approach that models reader emotions triggered by event-based sentences. The emotions are modelled in a three-dimensional space based on reader sentiment toward different entities (e.g., subject and object) in the sentence. The new approach was evaluated using a human-annotated news-headline corpus; the results revealed the proposed method to be competitive with benchmark ML techniques. The second phase entailed the creation of a proposed ACT-based model for predicting the temporal progression of the emotions of the interactants and their optimal behaviour over a sequence of interactions. The model was evaluated using three different corpora: fairy tales, news articles, and a handcrafted corpus. The results produced by the proposed model demonstrate that, despite the challenging sentence structure, a reasonable agreement was achieved between the estimated emotions and behaviours and the corresponding ground truth.