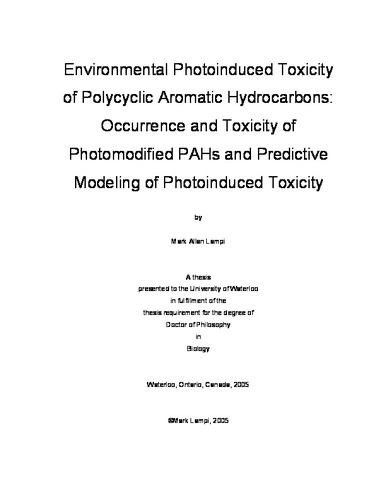 Polycyclic aromatic hydrocarbons (PAHs) are ubiquitous environmental contaminants known for their photoinduced toxicity. There are two mechanisms through which this may occur: photosensitization and photomodification. Photosensitization generally leads to the production of singlet oxygen, a reactive oxygen species (ROS), which is highly damaging to biological molecules. Photomodification of PAHs, usually via oxygenation, results in the formation of new compounds (oxyPAHs), and can occur under environmentally relevant levels of actinic radiation. <br /><br /> PAHs and oxyPAHs readily adsorb to the organic phase of particulate matter in the environment such as sediments. It is logical to conclude that sediment transport will also facilitate the transport of these contaminants, and it has been shown that in the course of transport, degradative processes evoke a change in the profile of the PAHs present. Sediment samples taken along a transect from Hamilton Harbour were fractionated, and analyzed using a 2D HPLC method. All sediments contained intact and modified PAHs, although a marked change was noted in the profile of compounds present in the samples, which differ in distance from shore. Fractions of sediment extract were tested for toxicity using a bacterial respiration assay. Toxicity was observed in fractions containing modified PAHs, and was similar to that of intact PAH-containing fractions. <br /><br /> Subsequently, the toxicities of 16 intact PAHs were assessed to <i>Daphnia magna</i> under two ultraviolet radiation (UV) conditions. The toxicity of intact PAHs generally increased in the presence of full spectrum simulated solar radiation (SSR), relative to visible light plus UVA only. To expand the existing data on the effects of PAH photoproducts to animals, fourteen oxyPAHs were also assayed with <i>D. magna</i>, most of which were highly toxic without further photomodification. The data presented highlight the effects of UV radiation on mediating PAH toxicity. The importance of the role of photomodification is also stressed, as several oxyPAHs were highly toxic to <i>D. magna</i>, a key bioindicator species in aquatic ecosystems. <br /><br /> A QSAR model previously developed for <i>Lemna gibba</i> showed that a photosensitization factor (PSF) and a photomodification factor (PMF) could be combined to describe toxicity. To determine whether it was predictive for <i>D. magna</i>, toxicity was assessed as both EC50 and ET50. As with <i>L. gibba</i> and <i>Vibrio fischeri</i>, neither the PSF nor the PMF alone correlated to D. magna toxicity. However, a PSF modified for <i>D. magna</i> did in fact exhibit correlation with toxicity, which was further improved when summed with a modified PMF. The greatest correlation was observed with EC50 toxicity data. This research provides further evidence that models that include factors for photosensitization and photomodification will likely be applicable across a broad range of species. To gain further knowledge of the roles that the variables contributing to the photosensitization and photomodification, a structural equation model was constructed based on the <i>D. magna</i> QSAR. This model accounted for a high amount of variance in six sets of toxicity data, as well as insight into the mechanisms of phototoxicity affecting different aquatic organisms.