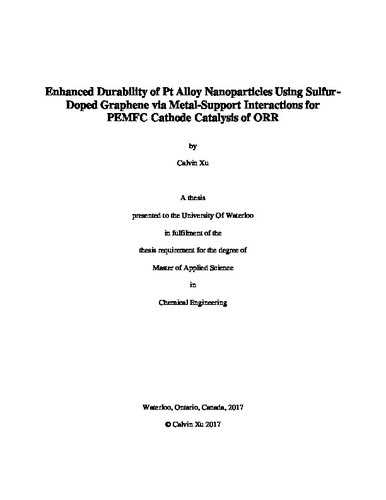 The hydrogen fuel cell is a form of renewable energy generation technology that produces energy electrochemically and can address energy concerns in the near future, especially due to the diminishing supplies of non-renewable fuel sources. However, the major challenge in current hydrogen fuel cells is the slow kinetics of the oxygen reduction reaction (ORR) at the cathode. Current catalysts of Pt/C are not yet cost effective in terms of catalytic activity. In addition, prolonged operation in fuel cell conditions leads to degradation of these catalysts, limiting long-term use. To address this, future fuel cell catalysts must be able to catalyze the ORR more effectively while simultaneously decreasing the content of Pt. The combination of Pt alloys and sulfur-doped graphene is hypothesized to increase both the catalytic activity and durability of the cathode catalyst, thereby increasing the viability of fuel cell technology. Pt has been alloyed with various other metals to increase catalytic activity, with multimetallic nanoparticles having shown superior performance over pure Pt catalysts. The phenomena responsible for this enhancement have attracted much interest, and proposed models behind the physical as well as electronic mechanisms have been scrutinized. In addition, recent work on sulfur-doped graphene (SG) support materials have been observed to increase the activity and durability of pure Pt catalysts by means of a tethering effect. The combination of Pt alloys with SG have not yet been investigated, and it is not yet known how they will behave in tandem. The interactions on the catalyst active sites will be under the influence of both the support material and the alloy characteristics. Because of this, changes to the physical and electronic structure are typically a convolution of mechanisms from these two components. Literature on Pt alloy catalysts has suggested that Pt combined with late 3d transition metals yield the most active electrocatalysts. In particular, bimetallic Pt-Ni nanoparticles have demonstrated considerable improvements in catalytic activity over state of the art Pt/C catalysts. In this work, bimetallic Pt-Ni alloy particles are deposited onto SG supports to serve as an ORR catalyst, then subjected to chemical dealloying and post heat treatment steps to produce three electrocatalysts with each representing a different stage of the synthesis procedure. Electrochemical testing of the catalysts will follow guidelines and targets set by the US Department of Energy, while other characterization techniques corroborate physical observations with the electrochemical results. In this project, results showed that the final stage of the prepared catalyst Pt-Ni/SG-PHT exhibited greater stability than commercial Pt/C in ADT conditions of 1500 cycles from 0.05 to 1.3 V vs RHE. The Pt-Ni/SG-PHT catalyst experienced a 27% loss in ECSA from 23.0 m2/g to 16.7 m2/g, while Pt/C suffered a 59% loss from 45.3 m2/g to 18.3 m2/g. Similarly, the mass activity of the Pt-Ni/SG-PHT catalyst decreased by 28.0% from 93 mA/mgPt to 67 mA/mgPt, while that of Pt/C deteriorated by 68.8% from 125 mA/mgPt to 39 mA/mgPt.