Can kynurenic acid cause myelin loss in chicken optic nerves? 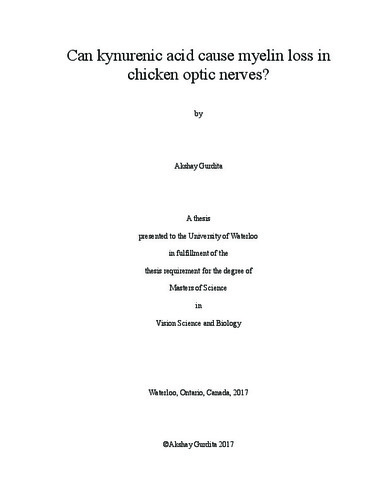 Kynurenic acid (KYNA) is one of many kynurenine intermediate products in the tryptophan metabolism pathway and has been shown to have neuro-activity. Previous work revealed that prolonged infusion of a high dose of KYNA could effectively reduce the myelin content in the rat spinal cord. We hypothesize that prolonged subdural infusion of kynurenic acid (KYNA) induces myelin loss in the optic nerves of chickens. Seven day old gallus gallus domesticus chickens were randomly selected for infusion of 50 mM KYNA or phosphate buffered saline (PBS). KYNA or PBS were loaded into an osmotic pump that was attached to a catheter. The catheter was inserted into the optic nerve and the pump was implanted under the skin in upper back region of the bird. A third group of birds received no treatment. Electron micrographs were collected and the percent of myelinated axons, g-ratios, the number of astrocytes, and the axon diameters were calculated by sampling from 4 quadrants of optic nerve sections. Enzyme-linked immunosorbent assays (ELISA) were performed on serum from the three groups in order to determine differences in the level of myelin proteins myelin basic protein (MBP) and proteolipid protein (PLP). Semi-quantitative analysis of western blots was performed for myelin proteins: MBP, PLP, and myelin associated glycoprotein (MAG) in addition to glial fibrillary acidic protein (GFAP). A 2x3 mixed model analysis of variance (ANOVA) was used to determine differences between the three treatment groups and eyes. Count data were analyzed using two one-way Kruskal-Wallis ANOVAs. Electron microscopy revealed that KYNA-infused nerves exhibited widespread loss of myelin sheaths and astrogliosis without inflammatory infiltration of the nerve. G-ratios for KYNA-infused chicks were greater than those for negative control birds (0.86 ± 0.04 for KYNA vs 0.78 ± 0.02 for NC; p = 0.0029) but were not significantly greater than compared to PBS-infused chicks (0.83 ± 0.06; p = 0.2605). ELISAs revealed no differences in the concentration of serum MBP or PLP across the three treatment groups indicating a non- destructive effect on myelin in the nerve (p = 0.8330 and p = 0.8759, respectively). Lastly, western blots revealed a qualitative reduction in the level of MBP and PLP, and GFAP in KYNA-infused birds compared to PBS-infused or negative control birds. Subdural infusion of 50 mM KYNA for 7 days induces myelin loss without inflammatory infiltration in the chicken optic nerve. KYNA may be useful for illuminating mechanisms in myelin production or oligodendrocyte function.