Re:Generation – A Model For Age-Inclusive Care 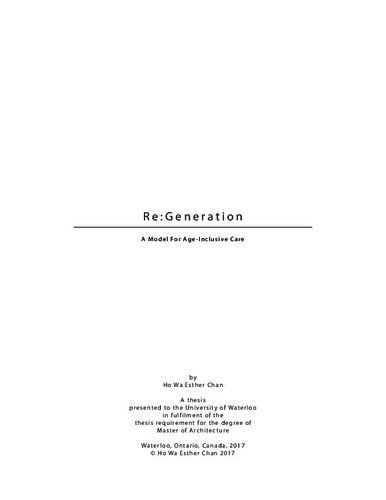 The Canadian population is aging. Seniors are becoming the fastest growing age group as a result of the aging of the baby boom generation, and a lowered fertility rate and an increase in life expectancy in the millennial generation. Currently, the population of Canada is approximately 35 million people, of which five million are aged 65 and over. It is estimated that by 2051, about one in four Canadians will be aged 65 and over. At the rate our population is aging, it is foreseeable that the cost of services for the elderly will escalate rapidly as a result of an increased demand for services but a lack of caregivers and facilities to support them. As such, there is a growing demand for new models of living and care for seniors with a shift towards a more economically sustainable, community-oriented schema, where the collaboration and mutual support between the residents could ease the economic and social burden for society. The author has developed a new approach with regards to designing for an aging population – a conceptual kit of parts known as the Model For Age-Inclusive Care. The thesis proposes the development of an age-inclusive multi-service and care hub to reintegrate the elderly into the social fabric of the city by using underperforming, under-utilized commercial developments as an activator. In essence, this thesis will attempt to connect between the more disparate parts of society through the incorporation of places with potential for development in an attempt to present a model of symbiotic community space aging.