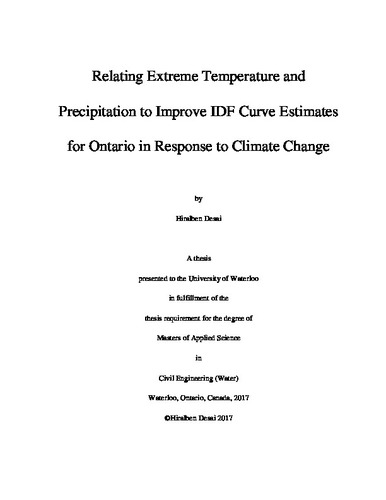 Events of extreme precipitation have a huge influence on society. They cause flooding, erosion, and threaten infrastructure, transportation, and safety. Precipitation extremes have increased over the last century (Alexander et al., 2006; Westra et al., 2014), and these changes are the outcome of anthropogenic climate change (Min et al., 2011). Precipitation extremes are expected continue their increase as the climate warms (Trenberth et al., 2003; Groisman et al., 2005, Emori and Brown, 2005). Precipitation extremes are expected to increase primarily because a warmer atmosphere can absorb more moisture. The increase in the moisture capacity of the atmosphere occurs at a rate given by the Clausius-Clapeyron relation (CCR)—approximately 7% per degree Celsius of temperature increase. The present study combines atmospheric thermodynamics, temporal trends, and interpolated physiographic parameters to forecast extreme precipitation. This provides a new paradigm that characterizes rainfall series, is sensitive to environmental attributes, and thus reflects climate change. This model is called the Waterloo Interpolator – Topography, Temperature, Time (WIT3). The model preserves a linear time trend from the Regional Trend Analysis (RTA) that Soulis et al. (2016) previously developed. WIT3 is compared with observations from the Meteorological Service of Canada (MSC). It is also compared to existing models, such as RTA and Ontario Climate Change Data Portal (OCCDP) models, for the historical period of 1960-2010. In these comparisons, WIT3 best matches the empirical distribution of Ontario weather stations. The extreme precipitation is forecasted up to 2099 using the WIT3 model, and is downscaled and bias corrected with temperature data from Global Climate Models (GCMs). I have also considered different Representative Concentration Pathways (RCP), or greenhouse gas (GHG) scenarios, to assess the inherent uncertainty of prediction using various GCM-RCP ensembles. Results revealed that, in the future, the frequency of the current design storms will almost double for all recurrence intervals and durations. Precipitation trends show an increase, especially after 2070. The increase in precipitation intensity is greater for smaller events, especially for the 5 y and 10 y storms, relative to the more severe storm events, such as the 50 y and 100 y storms.