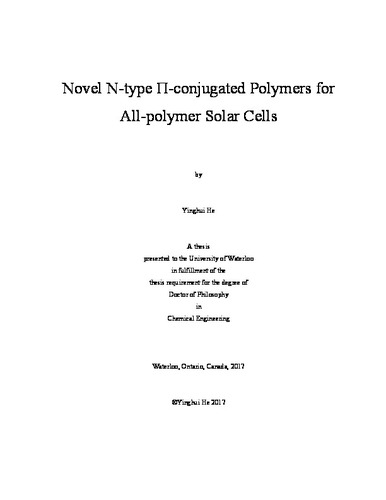 Organic solar cells (OSCs), also known as, organic photovoltaics (OPVs), appear as a promising technology for renewable energy owing to their light weight, great flexibility and low-cost fabrication process. So far most of the OPVs have been using fullerene derivatives, such as PCBM or PC71BM, as the electron acceptor in the active layer, which have been proven to a bottleneck for this technology. Therefore, developing non-fullerene acceptors has become the new driving force for this field. Allpolymer solar cells (all-PSCs) that have the advantages of robustness, stability and tunability have already achieved PCE up to 9%. However, there is still a significant gap between the all-PSCs and fullerene-based OSCs (PCE approaching 12%) despite tremendous effort that has been put into the optimization of both material and device. Thus, developing novel acceptor materials is imperative for improving the performance of all-PSCs. In this thesis, three classes of π-conjugated polymers were designed and synthesized for the application of all-PSC. The first class of polymers is based on an novel electron-deficient moiety, (3E,7E)-3,7-bis(2-oxoindolin-3-ylidene)-5,7-dihydropyrrolo[2,3-f]indole- 2,6(1H,3H)-dione (IBDP). The IBDP-based polymers (P1 and P2) showed balanced ambipolar transport property (electron mobility up to 0.10 cm2 V-1 s-1 and hole mobility up to 0.19 cm2 V-1 s-1) in OTFTs. In addition to the good charge transport properties, the IBDP polymers exhibited strong and broad adsorption profile across the visible and NIR region up 1100 nm as well as elevated LUMO levels at -3.70 eV. With these advantageous features, these IBDP polymers were used as acceptor with poly(3- hexylthiophene-2,5-diyl) (P3HT) as the donor in all-PSCs. After donor/acceptor ratio optimization, the resultant all-PSC devices showed high PCE of 3.38%, which is the highest PCE that has been obtained from P3HT-based all-PSCs so far. The second class consists of three (3E,7E)-3,7-bis(2-oxoindolin-3- ylidene)benzo[1,2-b:4,5-b’]difuran-2,6(3H,7H)-dione (IBDF)-based polymers that feature a new type of side chains that contain an ester group. The resultant IBDF polymers exhibited excellent electron transport properties with electron mobility up to 0.35 cm2 V-1 s-1 in OTFTs. When used as acceptor in all-PSCs with PTB7-Th as donor, low PCEs (<0.4%) were obtained, which was found to be caused by the poor miscibility of the donor and acceptor, as well as the inferior bulk charge transport properties of the IBDF polymers. Finally, a new building block, dihydroxylnaphthalene diimide (NDIO), was introduced for the first time into π-conjugated polymers. Due to the alkoxy groups, the electron affinity of the NDIO polymer is significantly higher than the NDI analogues, which led to an enhanced electron transport property and more stable performance in OTFTs upon air-exposure. When used as acceptor in all-PSCs with PTB7-Th as the donor, a decent PCE of 3.25 % was realized. In particular, the FF (0.61) of the solar cell devices is much higher than those of the NDI polymers based all-PSCs, which was attributed to the balanced charge transport for both hole and electron in the active layer, as well as the suppressed bimolecular recombination.