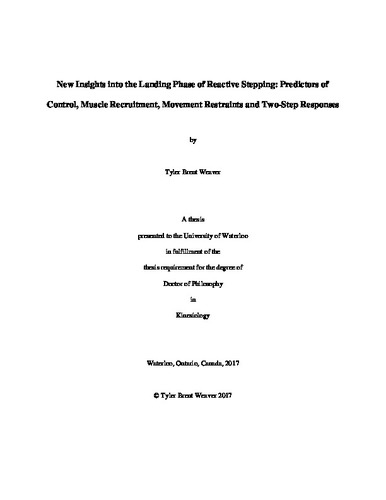 Preventing falls and fall-related injuries are public health challenges of the upmost importance for Canadians, particularly for older adults. Due to the severe consequences that can accompany a fall (e.g., traumatic brain injuries, hip fractures), studying age-related changes in balance control is an important avenue towards informing more effective fall-prevention interventions. As tripping is a common cause of falling in older adults, many researchers have studied reactive stepping after a simulated trip. While the majority of studies have focused on recovery at foot-contact (FC), researchers have begun to focus on the landing phase (or restabilisation phase), which occurs after the point of FC of the reactive step. This thesis adds to the burgeoning insights in this important area by addressing the following four general objectives: i) determine which individual characteristics are predictive of center of mass (COM) displacement during the reactive stepping and landing phases in young and older adults (Study 1); ii) determine how lower-limb muscle recruitment patterns during the landing phase compare to earlier phases of the reactive stepping response, as well as how lower-limb electromyography signals relate to each other during the landing phase (Study 2); iii) determine if wide stepping and restricted arm movement influence balance control during the landing phase (Study 3); and, iv) to quantify balance control after FC when participants responded with two reactive steps (Study 4). Reactive stepping was evoked via a tether-release paradigm. In Study 1, it was found that for both young and older adults, regression models driven by specific tether-release metrics were stronger predictors of COM movement during the stepping and landing phases compared to general metrics, calculated separately from the tether-release trials (e.g., response time, range-of-motion, etc.). For Study 2, which quantified lower-limb electromyography (EMG), the peak timing and magnitude were generally slower (more variable) and smallest from the point of the maximum COM after FC to the end of the trial. The muscles which exhibited their highest peak magnitude during the landing phase were the biceps femoris of the step-leg, which was correlated with the peak medial gastrocnemius magnitude during landing, and the rectus femoris and tibialis anterior of the support-leg. Peak magnitudes suggest that the step-leg biceps femoris and medial gastrocnemius and support-leg rectus femoris (in continuation from the swing phase) and tibialis anterior are important during landing, while the step-leg rectus femoris and tibialis anterior are important in the swing phase. Regarding the investigation of wide stepping and restricted arm movement in Study 3, wide stepping resulted in the largest medio-lateral (ML) and anterior-posterior (AP) body movement after FC, regardless of age group. Second, despite limited AP influence, restricted arm movement resulted in larger ML body movement after FC, compared to the preferred stepping condition. During Study 4, analyses of the first step revealed that during the two-step condition peak AP COM displacement after FC was increased, while peak ML COM displacement was decreased, for both loading conditions. With asymmetrical loading, first step lengths were larger during the one-step condition, while first step width was reduced over both stepping tasks with asymmetrical loading. During two-steps, peak AP extrapolated COM (xCOM) displacement after FC was larger in the second vs. the first step with asymmetrical loading, yet the first step resulted in greater ML xCOM displacement vs. the second step, regardless of loading. Interestingly, first step width was narrower than the second with asymmetrical loading. As hypothesized, peak xCOM displacement between the first and second steps was correlated. As a whole, the results of these studies provide novel insights into the landing phase of reactive stepping. A consistent theme pertains to the potential ability of pro-actively training effective reactive stepping responses. The findings suggest that researchers and clinicians should consider task specificity if training reactive stepping responses. Furthermore, focus should be placed on the muscles which were their most active (and correlated) during landing, (i.e., the biceps femoris and medial gastrocnemius of the step-leg). The large stability margin observed during wide stepping suggests it can be a positive strategy for increased ML stability. Incorporating the arms into training would also be positive, as ML COM control decreased when the arms were restricted. Finally, multi-step balance control should not be inferred using single-step responses, as differences in COM\xCOM displacement existed between stepping tasks and step number. Further, xCOM correlations between the first and second step did not improve when the one-step responses were used for the first step metrics. To further enhance the evidence base in this area, future work could focus on characterizing landing phase control during more dynamic activities such as tripping during gait, ideally with participants who represent high-fall risk groups.