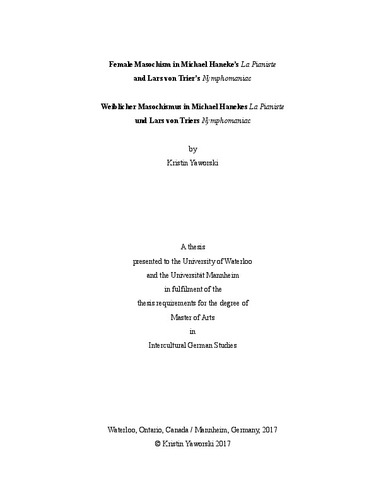 The figure of the female masochist, along with her desires and experiences, has been largely ignored within theories of masochism and examinations of masochistic aesthetics. With the rise of more graphic and challenging representations of female sexuality in cinema, it is time to readdress the female masochist and her representation in film. This thesis aims to fill this gap by examining representations of heterosexual female masochism in Michael Haneke’s film La Pianiste (2001) and Lars von Trier’s film Nymphomaniac (2013). Both films centre around a female protagonist whose masochistic desires and impulses propel the narrative forward. While these masochistic desires lead to ugly and violent sexual encounters with the main male character in each film, masochism is not condemned as the reason for this violence. It is, instead, normatizing world views that violently restrict notions of female subjectivity and sexuality. In this thesis, I examine the empowering aspects of masochism presented in these films. The female masochist exercises control over her desires and fantasies by creating and establishing a masochistic contract with her partner. In analyzing the contract in both films, it becomes clear that it allows for the female protagonist to be empowered. That the contract is betrayed and the female masochist is subjected to violence is indicative of how she continues to be restricted by gendered expectations of female behaviour. Such a conclusion is further supported through both films’ use of an anti-aesthetic. In contrast to the normative aesthetics of S/M, which emphasize pleasure over pain, the aesthetic in La Pianiste and Nymphomaniac insists on showing the infliction of pain and its effects on the female masochist. It is through this depiction of pain that both films invite spectators to reconsider the dangerous comfort of views that allow for such violence to persist.