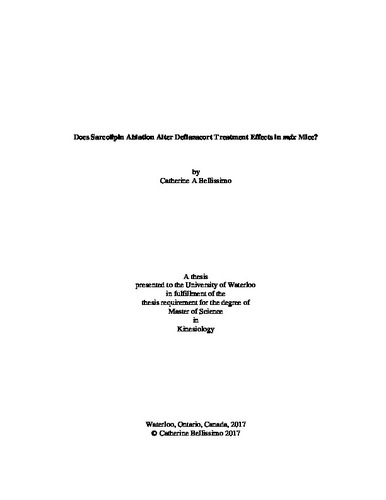 Duchenne Muscular Dystrophy (DMD) and the murine model mdx are degenerative diseases that are characterized by the absence of the protein dystrophin causing membrane instability, calcium (Ca2+) influx, and progressive muscle wasting. The sarco(endo)plasmic reticulum Ca2+-ATPase (SERCA) is the enzyme responsible for maintaining low cytosolic Ca2+ and is dysfunctional in mdx mice, contributing to elevations in cytosolic Ca2+. Sarcolipin (SLN) is an endogenous protein regulator of SERCA that reduces SERCA activity by lowering the apparent Ca2+ affinity of SERCA. SLN is highly upregulated in mdx muscle, yet when ablated from mdx mice a worsened phenotype is observed, possibly due to blunted calcineurin/NFAT signaling. Glucocorticoid steroids are the primary therapy for DMD patients and combat the dystrophic phenotype in mdx mice. Glucocorticoid steroids have been shown to stimulate calcineurin signaling, which results in the upregulation of utrophin, the homologue of dystrophin. Glucocorticoids also increase the expression of SLN, which may function to regulate calcineurin activity. The aim of this study was to determine whether SLN plays a role in the positive treatment effects of glucocorticoid steroids in mdx mice. It was hypothesized that glucocorticoid treatment would increase SLN expression, stimulate calcineurin activity and increase utrophin expression in muscles from mdx mice but not in muscles from mdx mice lacking SLN (i.e. mdx/Sln-/-). Here, four week old mdx and mdx/Sln-/- mice were injected with either the glucocorticoid, deflazacort (DFZ), or vehicle (VEH) alone for 7 days. Following treatment, soleus (SOL) and diaphragm (DIA) muscles were collected for biochemical and histological analyses. Protein content of SLN, utrophin, calcineurin, SERCA isoforms and nuclear factor activation T cell (NFAT), a transcription factor dephosphorylated by calcineurin, was determined using western blotting. Immunofluorescent/histological techniques were used to assess centralized nuclei, collagen infiltration, myosin heavy chain isoform, cross sectional area (CSA), and fibre size variability, using the variance coefficient of minimal Feret’s diameter. Activation of the calcineurin/NFAT signaling pathway was also assessed using co-localization of NFATc1 and DAPI, which stains nuclear DNA. DFZ treatment improved several markers of the dystrophic phenotype in both the SOL and DIA, including centrally nucleated fibres and collagen infiltration. There were some muscle-specific differences in fibre type distribution between genotypes and treatments but these were mostly minor differences in hybrid fibres. CSA was not affected in the majority of fibre types by DFZ or genotype. Unexpectedly, variability in fibre size was not improved by DFZ treatment but was actually increased in DFZ treated mdx/Sln-/- DIA compared with VEH. DFZ increased NFATc1 and DAPI co-localization in both mdx and mdx/Sln-/- mice in the SOL only. However, calcineurin content and utrophin in both SOL and DIA were not different between any groups. SERCA1a and SERCA2a content in SOL and DIA were not different between DFZ and VEH treated mice, but SERCA1a was lower in the DIA of mdx/Sln-/- mice compared to mdx mice. DFZ treatment increased SLN content in mdx SOL but not in DIA. In summary, 7 days of DFZ treatment improved some histological features of DMD in both mdx and mdx/Sln-/- mice in the SOL, which was associated with increased NFATc1 nuclear translocation, suggesting increased activation of the calcineurin/NFAT pathway. Despite histological improvements in the DIA with DFZ treatment, the calcineurin/NFAT pathway appeared not to be active in that tissue relative to VEH. Finally, contrary to the main hypothesis, DFZ effects were similar in mdx and mdx/Sln-/- mice, suggesting that SLN does not play a role in mediating the positive effects of DFZ.