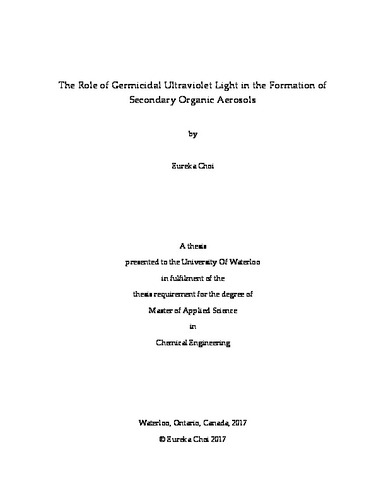 Ultraviolet (UV) light with a wavelength of 254 nm has proven to be effective at inactivating microorganisms, and thus has been increasingly employed as a method of disinfection of indoor environments. UV light with wavelengths of over 300 nm is known to promote the formation of secondary organic aerosol (SOA) particles. The portion of UV light produced by the sun that penetrates into the Earth’s atmosphere has wavelengths of over 300 nm, and is observed to promote SOA formation within the Earth’s atmosphere. The majority of SOA particles can be classified as fine particulate matter, or particles with diameters of 2.5 μm or smaller. The particles of fine particulate matter are of particular concern for human health, as they are associated with enhancing infectious diseases, causing allergic effects, and promoting respiratory and cardiovascular conditions. Germicidal UV treatment, using UV light with a wavelength of 254 nm, is commonly used for the purpose of improving air quality and reducing the transmission of infectious microorganisms. Thus, it is often used in environments such as hospitals, where there are individuals with weaker or compromised immune systems, and thus more susceptible to a variety of negative health effects. As such, these individuals would also be at higher risk for the health effects associated with exposure to fine particulate matter. Therefore, it is of importance to determine if the use of germicidal UV treatment in indoor environments will promote significant SOA formation. SOA particles are formed as a result of gas phase oxidation of volatile organic compounds (VOCs), and various types of VOCs are commonly found in almost all indoor environments. In this work, toluene was selected as the representative VOC to be tested. In the experiments, mixtures of air and toluene were exposed to 254 nm UV light, varying the conditions of the air, the amounts of toluene added, the duration of UV exposure, and the duration of post-UV recirculation. The amount of particles formed in the fine particulate matter size range were measured for each experiment. Significant levels of particle formation were observed for UV exposure periods of as short as 5 minutes. The particle formation levels ranged from 2.383 particles/cm3 for 5 minutes of UV exposure, to 1449.76 particles/cm3 for 15 minutes of UV exposure. Particle formation was found to increase with increasing concentrations of gas phase toluene, as well as increasing durations of UV irradiation. Higher levels of relative humidity also resulted in increased particle formation and growth. However, the amount of recirculation time after UV exposure did not appear to have a significant effect on the level of particle formation. The initial amount of ambient particles present prior to UV exposure varied from 3.781 particles/cm3 to 27.082 particles/cm3, and was found to correlate positively with the relative humidity of the air. Variations in the initial amount of particles present over this range did not have an effect on the amount of particle formation. Overall, in this work, it was determined that exposure of toluene to 254 nm germicidal UV light does result in SOA particle formation.