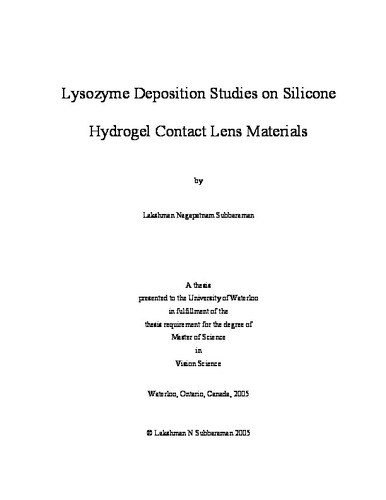 Over 60 proteins have been detected in the tear film and among these lysozyme has attracted the greatest attention. Several techniques for elucidating the identity, quantity and conformation of lysozyme deposited on soft contact lenses have been developed. Lysozyme also deposits on the newly introduced silicone hydrogel (SH) lens materials, but in extremely low levels compared to conventional hydrogel lenses. Hence, a major analytical complication with the study of the SH contact lens materials relates to the minute quantity of deposited lysozyme. The first project of this thesis involved the development of a method whereby lysozyme mass extracted from SH lens materials would be preserved over time and would be compatible with an optimized Western blotting procedure. This methodological development was incorporated into a clinical study (CLENS-100® and Silicone Hydrogels ? CLASH study) wherein the difference in the degree of total protein, the difference in lysozyme deposition and activity recovered from lotrafilcon A SH lens material when subjects used surfactant containing rewetting drops (CLENS-100®) versus control saline was investigated. The remaining experiments were in vitro experiments wherein the lenses were doped in artificial lysozyme solution containing <sup>125</sup>I-labeled lysozyme. These experiments were performed to gain insight into the kinetics of lysozyme deposition on SH lens materials and also the efficacy of a reagent in extracting lysozyme from SH lens materials. A protocol was developed whereby the percentage loss of lysozyme mass found on lotrafilcon A SH lenses was reduced from approximately 33% to <1% (p<0. 001), following extraction and resuspension. The results from the CLASH study demonstrated that when subjects used a surfactant containing rewetting drop instead of a control saline drop total protein deposition (1. 2±0. 7 µg/lens versus 1. 9±0. 8 µg/lens, p<0. 001), lysozyme deposition (0. 7±0. 5 µg/lens versus 1. 1±0. 7 µg/lens, p<0. 001) and percentage lysozyme denaturation (76±10% versus 85±7%, p=0. 002) were all reduced. The results from the kinetics study demonstrated that lysozyme accumulated rapidly on etafilcon A lenses (1 hr, 98±8 µg/lens), reached a maximum on the 7th day (1386±21 µg/lens) and then reached a plateau (p=NS). Lysozyme accumulation on FDA Group II and SH lenses continued to increase across all time periods, with no plateau being observed (p<0. 001). The results from the extraction efficiency study showed that 0. 2% trifluoroacetic acid/ acetonitrile was 98. 3±1. 1% and 91. 4±1. 4% efficient in extracting lysozyme deposited on etafilcon A and galyfilcon lenses, while the lysozyme extraction efficiency was 66. 3±5. 3 % and 56. 7±3. 8% for lotrafilcon A and balafilcon lens materials (p<0. 001). The results from these studies re-emphasize that novel SH lens materials are highly resistant to protein deposition and demonstrate high levels of biocompatibility.