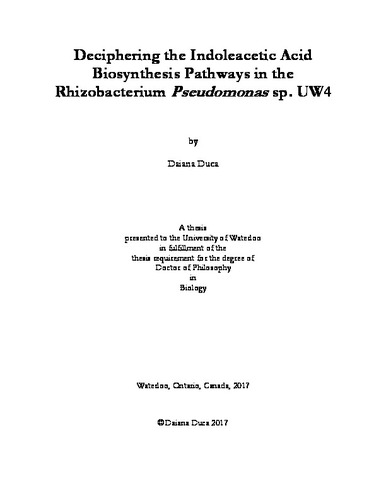 Healthy plants host, within and on the surfaces of their tissues, diverse endophytic and epiphytic bacteria. Often, this interaction is mutualistic, leading to adaptive benefits for both partners. We refer to these beneficial microbes as plant growth-promoting bacteria (PGPB), as they can have a tremendous positive influence on plant health, yield and productivity. PGPBs can be used as natural biofertilizers to promote plant growth in an environmentally responsible manner. One of the main mechanisms used by PGPB to enhance plant growth is the production of indoleacetic acid (IAA). This compound is central to a plant’s lifecycle and overall functioning. Because of the indispensable role of IAA in plant-growth promotion, there is great interest in genetic manipulation of IAA biosynthesis to maximize phytostimulation. This is a cumbersome task, as the nature of IAA biosynthesis is convoluted; multiple, independent and inter-dependent pathways operate within a single bacterium. The research reported herein strived to decipher the IAA biosynthesis pathways at the genetic and biochemical level, in a particularly effective PGPB known as Pseudomonas sp. UW4. This remarkable rhizobacterium has been shown to enhance plant growth in the presence of flooding, heavy metals, cold, high levels of salt, and phytopathogens. The entire genome of strain UW4 was sequenced in our lab and seven genes were implicated to encode enzymes involved in the indole acetonitrile (IAN) and indoleacetamide (IAM) pathways of IAA biosynthesis. In this work, some of these enzymes were isolated and their catalytic activity was experimentally verified through biochemical assays. Transformants of strain UW4 with increased IAA biosynthetic capacity were created by introducing a second copy of the target IAA-genes, and canola seedlings inoculated with these transformants displayed enhanced root growth. Mutagenesis experiments were undertaken to create deletions in all seven IAA-genes, in order to delineate which of the genes/pathways contribute most to IAA production in this strain. Failure to produce mutants with a reduced ability to synthesize IAA, led to speculation of a third pathway. Biochemical evidence of this pathway is based on the detection of the IPyA metabolite. The IPyA pathway appears to be predominant in strain UW4 and can compensate for disruptions in the IAN/IAM pathways. Genomic screens identified several candidate IPyA pathway genes, however the functional roles of the encoded enzymes remain to be determined. Altogether, this work describes three interconnected IAA biosynthetic pathways in strain UW4.