Memory, Modernity, and the City: An Interpretive Analysis of Montreal and Toronto's Respective Moves From Their Historic Professional Hockey Arenas 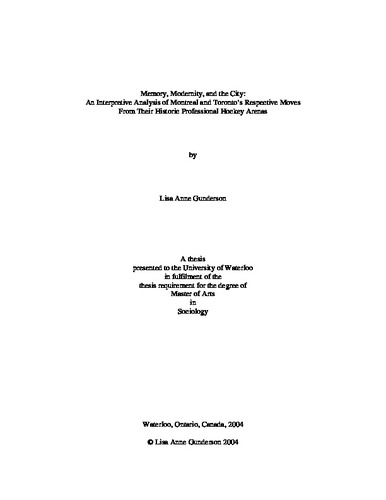 This thesis seeks to understand how and if the popular claims that hockey is an integral part of the culture in Toronto and Montreal are referenced, oriented to, and/or negotiated in everyday life. Taking the cases of the moves of the Toronto Maple Leafs and the Montreal Canadiens from Maple Leaf Gardens and the Montreal Forum, respectively, the thesis asks: What can these similar cases tell us about the culture of the cities in which they occurred and, if it is possible, in what ways can the culture of the cities (as a shaping force) be made recognizable in the discourse generated in, around, and by the moves? The perspective taken is a 'radical interpretive' approach, involving a critical blend of interpretive theories and methodologies - including semiology, phenomenology, hermeneutics, and dialectical analysis - that aim to reflexively question the themes that the cases themselves bring to light. The thesis thus concerns itself with issues of cosmopolitanism, globalization, and modernity as well as the concomitant questions of identify, commitment to place, and practical social action in the modern city.