Non-linear Interactions between Internal Wave Beams: Beyond the Traditional Approximation. 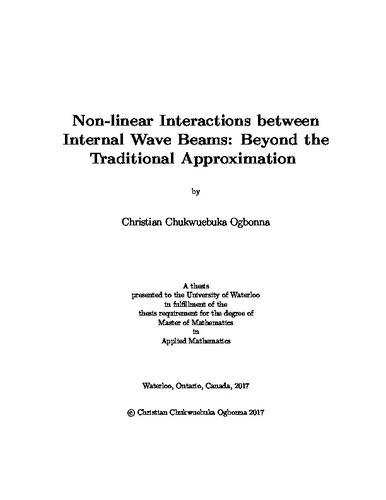 The problem of nonlinear interactions of internal waves is solved using small-amplitude expansions beyond the traditional approximation; that is the horizontal component of the Earth’s rotation vector is included in our analysis. It is shown that higher harmonics are generated from the reflection of propagating internal waves from a uniform slope due to the nonlinear interactions between the incident and the reflected first harmonic, this nonlinear interaction is restricted to the region where the two beams meet. A criterion for critical reflection is derived in 2-D which depends on the horizontal orientation of the bottom slope in the horizontal geographical plane. The inclusion of the non-traditional $\tilde{f}$ term significantly changes the dynamics of internal waves in the ocean particularly for near inertial waves and for weak stratification due largely to the presence of inertial and sub-inertial waves which are absent in the traditional approximation. We also discuss collisions of two beams with respect to two collision configurations (the same sign horizontal and the same sign vertical group velocity). Secondary beams with frequencies equal to the sum and in some cases the difference of the frequencies of colliding beams are generated in the vicinity of the collision region particularly for the same sign horizontal group velocity configuration. The predictions of the formation rule adopted in this thesis are illustrated by specific examples using Internal Gravity Wave (IGW) adapted numerical simulations.