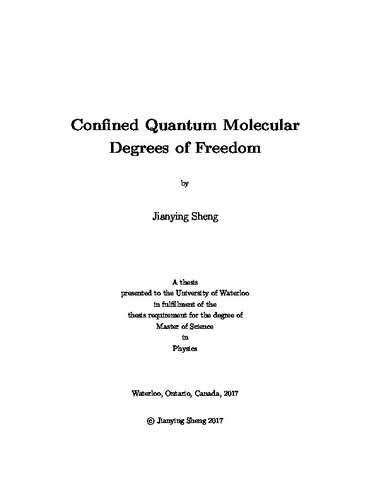 Motivated by recent experimental measurements of the degeneracy lifting of the rotational ground state of molecular ortho-H2 con ned inside the fullerene cage C60 and, more generally, motivated by the physics of con ned quantum molecular degree of freedom. By using exact diagonalization we performed a detailed study on the coupled translational and rotational motion of H2 based on the Van der Waals interaction model. We found that degeneracy lifting is caused by a symmetry reduction from Ih to C3i symmetry of C60 in its solid state. The origin of the degeneracy lifting is found to mainly arise from the interaction between H2 and its C60 cage instead of the interaction between the H2@C60 molecule and its neighbouring molecules. The size of the splitting is extremely sensitive to the cage geometry while sitting in a relatively large linear regime. The zero point motion e ect of carbon atoms does not change the size of the splitting. The analytical study also was preformed by using multipole expansion on Lennard-Jones potential in order to gain a more physical perspective on con ned quantum molecular degree of freedom.