The Tracing of a Contaminant (Tritium) from Candu Sources: Lake Ontario 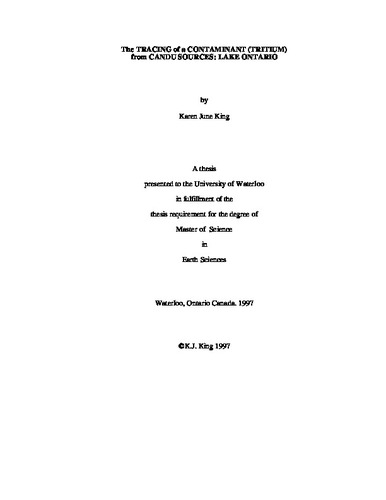 In any research program we begin with a hypothesis and when our expected results do not concur with the observed results we must try and understand the dynamics behind the changed process. In this study we were trying to understand the flux between regional groundwater systems, surface waters and sedimentation processes in order to predict the fate of contaminants entering one of the larger bodies of water in the world- Lake Ontario. This lake has increased levels of tritium due to anthropogenic inputs. Our first approach to the problem was to look at tritium fluxes within the system . Hydrological balances were constructed and a series of sediment cores were taken longitudinally and laterally across the lake. The second approach was to quantify the sediment accumulation rate (SAR) within the depositional basins and zones of erosion in order to improve the linkage between erosion control (sedimentation) and the water quality program. In the last chapter the movement of tritium, by molecular diffusion, through the clayey-silts of Lake Ontario is quantified in terms of an effective diffusion coefficient. In these sediments effective diffusion equals molecular diffusion. In a laboratory experiment four cores of lake sediment were spiked with tritium . The resulting concentration gradient changes in the sediment porewaters after six weeks could be modeled by an analytical one- dimensional diffusive transport equation. Results calculated the average lab diffusion coefficient to be 2. 7 x 10 - 5cm 2. sec -1 which is twice that determined by Wang et al, 1952 but still reasonable. Short cores (50 cm) from lake Ontario had observed tritium concentrations with depth that reflected a variable diffusive profile. The increases and decreases in tritium with depth could be correlated between cores. Monthly tritium emission data was obtained and correlations between peaks in the tritium profile and emissions were observed. Monthly variations in release emissions corresponded to approximately a one centimeter slice of core. An average calculated diffusion coefficient of theses cores was 1. 0 x 10 -5 cm 2. sec -1 which compares to Wang's coefficient of 1. 39 x 10 -5 cm 2. sec -1. This implies that tritium is moving through the sediment column at a rate equal to diffusion. The results were obtained for smoothed values. It was not possible to model the perturbations of the data with a one dimensional model. The dynamics of the system imply that tritium could be used as a biomonitor for reactor emissions, mixing time and current direction scenarios and that a better understanding of this process could be gained by future coring studies and a new hypothesis.