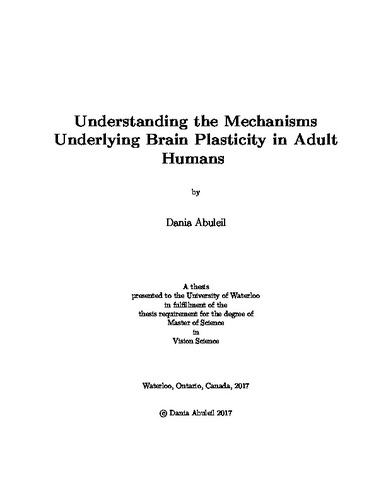 Purpose: The human brain changes signi cantly with age. The plasticity of the visual cortex is thought to decrease into adulthood while childrens' brains are highly plastic. This change in plasticity is thought to be due, in part, to an inhibitory neurotransmitter known as gamma-aminobutyric acid (GABA). Recent research has established a general increase in GABA levels from childhood into adulthood, thought to be associated, in part, with the decrease in plasticity. It is unclear, however, whether GABA levels a ect the changes in plasticity that occur from young adulthood into older age. In older age, a further decrease in GABA levels has been suggested. The purpose of this thesis is threefold: (1) To implement a strategy for inducing long-term potentiation (LTP), (2) to understand the associations between psychophysical and physiological measures of neuroplasticity within the primary visual cortex, (3) to assess the e ect of age on both measures We hypothesize that as plasticity continues to decline into older age, GABA levels will continue to increase. Methods: Binocular rivalry alternation rates (ARs) were used as a behavioural measure of cortical GABA levels. A dichoptic presentation using red/green glasses was displayed on an Asus 3D Vision Ready monitor. Young (18-40 years) and older (60-80 years) participants wearing red/green glasses indicated whether they perceived the red grating, green grating, or a mix of the two{referred to as piecemeal{using 3 keys. Visually-evoked potentials (VEPs) were then used as a measure of the change in plasticity following a rapid onset/o set checkerboard stimulus thought to induce LTP within the primary visual cortex. VEPs before and after the inducing stimulus were recorded and compared. Results: ARs were signi cantly slower in older adults compared to the young adults. Pre to post waveform amplitudes had relatively lower LTP in the young adults compared to the older adults; however neither group showed signi cant LTP (p>0.05 for main e ect of pre versus post VEP amplitude). Conclusions: No correlation between AR and LTP was observed. AR was slower in older adults than in young adults. LTP was relatively greater in older adults compared with the young adult group. A decrease in GABA levels with older age, as most studies have found, alludes to an increase in ARs; however this was not the case in the present results. In contrast, while slower ARs suggests an increase in GABA levels, LTP was relatively greater in older adults suggesting a decrease in GABA levels. These data indicate that either AR or LTP, or both AR and LTP, are inadequate measures of GABA concentration or inaccurate measures of plasticity, or that GABA and LTP may not be directly related in the tested sample. Changes in neurotransmitter concentrations with age may lead to neural adaptations that alter the response to both rivalry and LTP in unexpected ways.