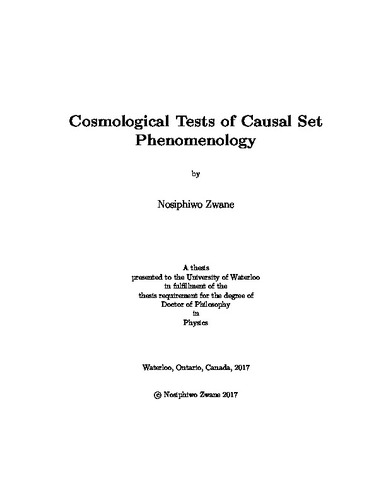 Causal Set Theory is an approach to Quantum Gravity that postulates that the fundamental structure of a spacetime manifold is a Lorentz Invariant discrete structure endowed with a causal order from which the geometry and topology of the spacetime can be recovered. The continuum emerges as an approximation at macroscopic scales. Lorentz Invariant discreteness can have consequences that can be observed at low energies. In this work, we search for signatures of causal set predictions. Causal Set Theory predicts that the cosmological constant $\Lambda$ is Everpresent and fluctuates between positive and negative values. This Cosmological model, a stochastic function of cosmic time that varies from one realization to another, generates a space of histories of dark energy. Via Monte Carlo Markov chains we search the space of histories of dark energy to find the best fit to Cosmic Microwave Background (CMB) data, Big Bang Nucleosynthesis (BBN) data and Baryon acoustic oscillations (BAO) data. The model fits the current cosmological observations well and eases the tension that standard $\Lambda$CDM has at high redshift. Causal Set Theory also predicts that a particle propagating on a causal set will undergo diffusion in momentum space. For massive particles, the diffusion process has only one parameter, the diffusion constant. For massless particles this process has two parameters $-$ the diffusion constant and the drift parameter. These parameters depend on the non-locality scale of the theory. Simulations were run to find the relation between these parameters and the non-locality scale. There by using bounds on the diffusion constant, we set bounds on the non-locality scale.