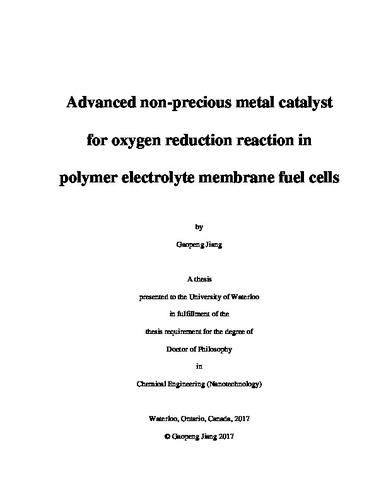 To address the global energy and environmental challenges, the polymer electrolyte membrane fuel cell (PEMFC) is proposed and developed as one of the most promising power source candidates for various applications including electric vehicles, stationary power stations and portable devices due to its high efficiency and low emissions. However, the intrinsically sluggish reaction at the cathode, namely the oxygen reduction reaction (ORR), hinders the large-scale commercialization of the PEMFC as expensive and scarce platinum-based catalysts are used to accelerate this reaction. In order to reduce the cost of PEMFC, non-precious metal catalyst (NPMC) towards ORR has been developed and already brought itself from a pure scientific curiosity to a practically viable option for some commercial applications. In this work, two classes of low-cost NPMCs are investigated. One class is composed of high temperature treated transition metal-nitrogen-carbon M-N-C (M=Fe, Co) complex catalyst, especially iron-nitrogen-carbon complex (Fe-N-C) catalyst. These materials can demonstrate decent ORR activity and durability and provide high power output at moderate operating voltages. The other class with an even lower cost is the metal-free catalyst, which omits the metal content from M-N-C catalysts completely. This type of catalyst demonstrates excellent durability, especially in the presence of species that can cause contamination (e.g. carbon monoxide) or species that can cross-over (e.g. methanol). These two classes of NPMCs are developed and delivered with the ultimate objective of achieving a significant cost reduction in PEMFC while maintaining excellent PEMFC performance and durability. Herein, the research in this thesis starts with novel N, S-co-doped Fe-N-C catalysts to meet the objective of obtaining a highly economical and efficient NPMC. The catalyst is fabricated via pyrolyzing the composite of in-situ polymerized novel N, S-co-containing precursor, polyrhodanine (PRh) onto the acid-treated carbon black via the initiation of FeCl3. The N, S-co-doped Fe-N-C catalyst is obtained after two heat-treatment steps with one acid-leaching step in between. The catalyst demonstrates excellent ORR activity, bearing a half-wave potential of 0.77 V vs RHE in the acidic electrolyte. It also shows an excellent H2-air PEMFC performance, ranking the obtained peak power density (386 mW cm-2 at 0.46 V) among the best reported NMPC catalyst in H2-air PEMFC in the world. The N, S-co-doped Fe-N-C catalyst tends to catalyze the oxygen reduction via four electron pathway according to its number of transferred electrons (>3.94) and low peroxide yield (< 2.8 %). In addition, it demonstrates decent durability, showing only 32 mV downshift after 5000 potential sweep cycles in the ADT tests. The role of sulfur in this N, S-co-doped Fe-N-C is examined with the assistance of different characterizations and the comparison with an S-free nitrogen precursor (polypyrrole, PPy). Sulfur can benefit the ORR activity and durability of FePRh-HT2 catalyst with regard to the morphology, active sites density as well as the molecular structure of active sites. In the presence of sulfur, FeS nanoparticles are formed during pyrolysis and they function as the macropore and mesopore agents to enhance the BET surface area as well as the mass diffusion after acid leaching. The formation of FeS during the pyrolysis inhibits the formation of Fe3C and facilitates the formation of the Fe-Nx active sites, resulting in higher active sites density of FePRh-HT2 as opposed to FePPy-HT2. The sulfur-doped Fe-N4 active site structure demonstrates a better affinity to O2 molecule comparing to Fe-N4 active site structure in the DFT calculation, corroborating the better ORR stability of the FePRh-HT2 catalyst. Therefore, the multi-functionality of sulfur from the precursor PRh endows this N, S-co-doped NPMC with high ORR activity and durability This research also presents the feasibility of highly porous free-standing low-cost metal-free catalysts that are successfully prepared via the solution casting methodology followed by annealing the porous PBI-Py membrane at high temperature. The obtained catalyst film is truly metal-free and has adjustable 3D nano-network structure. The surface area of final catalyst can reach as high as 902 m2 g-1 by tuning the amount of pore agent in the casting solution, The optimal catalyst in this series is 95%PBI-Py-1000 which demonstrates comparable activity (E1/2 = 0.82 V vs. RHE) to commercial Pt/C catalyst in alkaline electrolyte and superior methanol tolerance to that of commercial Pt/C catalyst in RDE tests. The results suggest not only PBI-Py to be a decent nitrogen precursor for metal-free catalysts, but also the solution casting methodology as a feasible methodology for NPMC fabrication. To further reduce the cost of ORR catalysts and introduce another level of environmental-benignity, biomass precursor, cellulose nanocrystals (CNC) are applied to develop N-doped mesoporous carbon nanorods as the metal-free catalysts. With a smooth coating of MF on the surface of CNC, the MFCNC derived fibrous-structure of mesoporous nitrogen-doped carbon nanorods, N-CNR were obtained via one-step pyrolysis. The decent catalytic activity towards ORR in the alkaline electrolyte shapes N-CNR as the excellent metal-free catalysts with ultralow cost. In summary, this thesis focuses on the development of NPMC, including M-N-C catalysts and metal-free catalysts, with high activity and durability towards ORR as well as achieving a cost reduction for the catalyst. Several recommendations for future work based on this work are also included at the end, offering what we believe are meaningful future research directions for the development of NPMC for ORR.