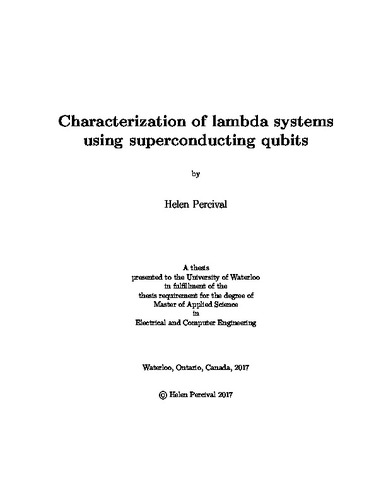 Lambda systems, with a metastable state in addition to the ground state, naturally occur in many atomic systems. Atomic lambda systems offer many potential applications in quantum information processing including single photon transistors and quantum memories. In superconducting qubits, ladder type systems are most common, useful lambda systems, however, have remained elusive. An effective lambda system was created, formed from the Jaynes-Cummings dressed states of a superconducting qubit-cavity system. Using two-photon driving, the system can be controlled as a conventional lambda system. The performance of the device is characterized to determine the suitability of it for various applications, including the single photon regime. A model was developed to investigate the effects of detuned two-photon drive. This model restricts the cavity-qubit system to only the three levels that are used in the lambda system. In the time domain, the drives interfere. Only when the drives are detuned by the same amount in opposite directions do they not interfere and the coupler invokes the transistion it is driving. In this experiment, a 3D transmon was placed in a superconducting aluminum cavity with a decay rate U+03BA=0.25MHz. Qubit characterization demonstrate that the transmon has T1=17U+03BCs and T2=35U+03BCs. From this, the decay rate of the qubit was calculated to be U+0393=62.5Hz, indicating the system has U+03BAU+02C3U+0393, which is necessary to form an effective lambda system. Using the two drives, it was shown that the detuning of the two-photon driving is linear. Holding one of these drives constant in frequency and drive power, it was demonstrated that the detuned frequency of the second drive changes quadratically with its drive amplitude. Suitability of the system to the single photon regime was investigated by using the two detuned drives: a strong, continuous wave drive, and a weaker, pulsed drive. Decreasing the pulsed drive amplitude, it was shown that the metastable state can be populated a pulse of only 3700 photons, suggesting with better signal isolation, and quantum-noise-limited signal amplification, the single photon regime may be achieved.