"We of the New Left": A Gender History of the Student Union for Peace Action from the Anti-Nuclear Movement to Women's Liberation 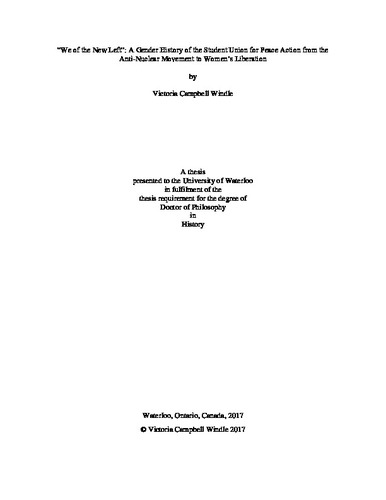 The Student Union for Peace Action (SUPA), was a Canadian group of New Leftists that formed a multi-issue movement for radical social change in the 1960s. SUPA emerged out of the Combined Universities Campaign for Nuclear Disarmament, and organized around peace, racial and economic equality, and educational freedom between December 1964 and September 1967. At its final conference, four SUPA women, Judy Bernstein, Peggy Morton, Linda Seese, and Myrna Wood, presented a paper titled, “Sisters, Brothers, Lovers…Listen…,” in which they argued for the addition of gender equality to this list of New Leftist concerns. Following this conference, Morton, Seese, and Wood formed Canada’s first women’s liberation group in Toronto. This dissertation explores both the character of SUPA’s New Leftism, and the rise and articulation of a feminist consciousness within the group. The definition of New Leftist activism is contested among scholars. This study builds upon an historiographical challenge to New Leftist narratives that focus squarely on young white middle-class men, by arguing that its history belongs to several other actors, such as older leftists, civil rights activists, and women’s liberationists. SUPA illuminates a definition of New Leftism as a collection of overlapping movements around issues such as nuclear disarmament, economic and racial justice, and eventually, gender equality. Using a gender-conscious approach, this dissertation examines how these movements converged within SUPA, and how each served as a backdrop to the development and expression of a feminist consciousness that led to the production of “Sisters, Brothers, Lovers...Listen...” in 1967. By examining SUPA’s history through a lens of gender, this dissertation presents new understandings of the impact of the group’s strategic shifts upon activists, and of its operations as a movement. It further complicates the conventional representation of activist women in the group as secretaries and maternal figures, which has developed out of isolated readings of “Sisters, Brothers, Lovers...Listen...” A gender study of the multiple sites of SUPA’s movement activity demonstrates that while gender expectations certainly shaped women’s experiences, they did not have a uniform impact, and did not impose one-dimensional activist identities upon women in the group; rather, as this dissertation argues, SUPA women’s participation in the movement took different forms, and resulted in multifaceted activist identities. Their experiences were marked by a tension between subordination and empowerment, and it was from this position that they analyzed their place in the movement, and called for the inclusion of gender equality to the list of New Leftist demands.

Victoria Campbell Windle (2017). "We of the New Left": A Gender History of the Student Union for Peace Action from the Anti-Nuclear Movement to Women's Liberation. UWSpace. http://hdl.handle.net/10012/12406