The Proximon: Representation, Evaluation, and Applications of Metagenomic Functional Interactions 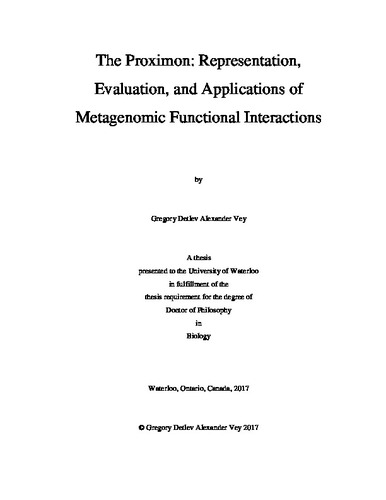 The effective use of metagenomic functional interactions represents a key prospect for a variety of applications in the field of functional metagenomics. By definition, metagenomic operons represent such interactions but many operon predictions protocols rely on information about orthology and/or gene function that is frequently unavailable for metagenomic genes. In this thesis, I introduce the proposition of the proximon as a unit of functional interaction that is intended for use in metagenomic scenarios where supplemental information is sparse. The proximon is defined as a series of co-directional genes where minimal intergenic distance exists between any two consecutive member genes within the same proximon. In particular, the proximon is presented here as a biological abstraction aimed at facilitating bioinformatics and computational goals. In this thesis, proximons are constructed as information theoretic entities and employed in a variety of contexts related to functional metagenomics. I begin by implementing a computational representation for proximon data and demonstrate its utility through the deployment of a public database. Next, I perform a formal validation where proximons are contrasted against known operons by using the Escherichia coli K-12 model organism as a gold standard to measure the extent to which proximons emulate actual operons. This is followed by a demonstration of how proximon data can be applied to infer potential functional networks and depict potential functional modules. I conclude by enumerating the limitations of the research performed here and I present objectives and goals for future work.