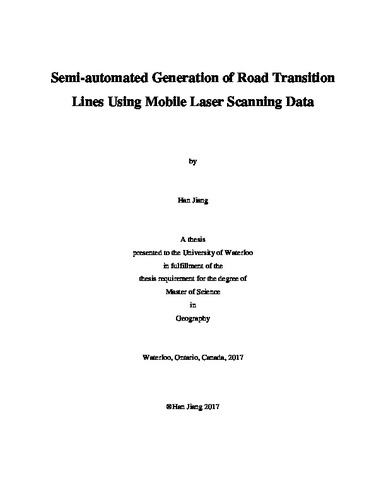 Recent advances in autonomous vehicles (AVs) are exponential. Prominent car manufacturers, academic institutions, and corresponding governmental departments around the world are taking active roles in the AV industry. Although the attempts to integrate AV technology into smart roads and smart cities have been in the works for more than half a century, the High Definition Road Maps (HDRMs) that assists full self-driving autonomous vehicles did not yet exist. Mobile Laser Scanning (MLS) has enormous potential in the construction of HDRMs due to its flexibility in collecting wide coverage of street scenes and 3D information on scanned targets. However, without proper and efficient execution, it is difficult to generate HDRMs from MLS point clouds. This study recognizes the research gaps and difficulties in generating transition lines (the paths that pass through a road intersection) in road intersections from MLS point clouds. The proposed method contains three modules: road surface detection, lane marking extraction, and transition line generation. Firstly, the points covering road surface are extracted using the voxel- based upward-growing and the improved region growing. Then, lane markings are extracted and identified according to the multi-thresholding and the geometric filtering. Finally, transition lines are generated through a combination of the lane node structure generation algorithm and the cubic Catmull-Rom spline algorithm. The experimental results demonstrate that transition lines can be successfully generated for both T- and cross-intersections with promising accuracy. In the validation of lane marking extraction using the manually interpreted lane marking points, the method can achieve 90.80% precision, 92.07% recall, and 91.43% F1-score, respectively. The success rate of transition line generation is 96.5%. Furthermore, the Buffer-overlay-statistics (BOS) method validates that the proposed method can generate lane centerlines and transition lines within 20 cm-level localization accuracy from MLS point clouds. In addition, a comparative study is conducted to indicate the better performance of the proposed road marking extraction method than that of three other existing methods. In conclusion, this study makes a considerable contribution to the research on generating transition lines for HDRMs, which further contributes to the research of AVs.