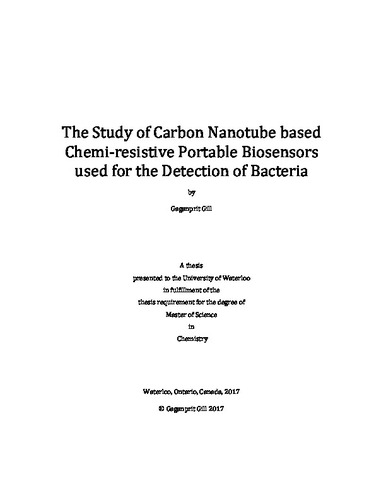 The successful fabrication and characterization of a portable, disposable single walled carbon nanotube biosensor used for the detection of bacteria was demonstrated by this work. The Si/SiO2 based SWNT growth using chemical vapor deposition techniques successfully developed ultra sensitive thin single walled carbon nanotubes. The SWNTs were transferred to a portable disposable platform, to demonstrate the commercial potential of a SWNT biosensor that is capable of sensing bacteria. The platform was developed to understand the effects of pH sensing, followed by bacteria sensing. The dominant mechanism of sensing for these devices with respect to pH sensing is chemical doping however the sensing mechanism for bacteria detection is undetermined. Using electrochemical impedance techniques to deeply understand and investigate the electrochemical changes to the surface of the SWNT sensors, the resistance change for pH sensing and bacteria sensing was concluded. With an increase in pH levels, the total resistance of the SWNT sensor also increases. The limit of detection for bacteria sensing with this platform was 105 cfu/mL. It was determined that the charge transfer resistance of the SWNT increases with an antibody surface immobilization and then further increases with the addition of bacteria binding to antibody. From bare electrode to antibody and then bacteria, the charge transfer resistances were 774Ω, 1025Ω, and 1229Ω, respectively. The double layer capacitance for these sensors indicated a different pattern. Preliminary results for concentrations lower than 105cfu./mL suggests an increase in double layer capacitance with an increase in analyte concentration. Using SWNTs as the transducing element of chemiresistive biosensors allowed for a further understanding of the electrochemical mechanisms of sensing, as well as successfully fabricating a sensitive, real-time, reproducible electrical bacteria-sensing device.

Gaganprit Gill (2017). The Study of Carbon Nanotube based Chemi-resistive Portable Biosensors used for the Detection of Bacteria. UWSpace. http://hdl.handle.net/10012/12376