A Quasilocal Hamiltonian for Gravity with Classical and Quantum Applications 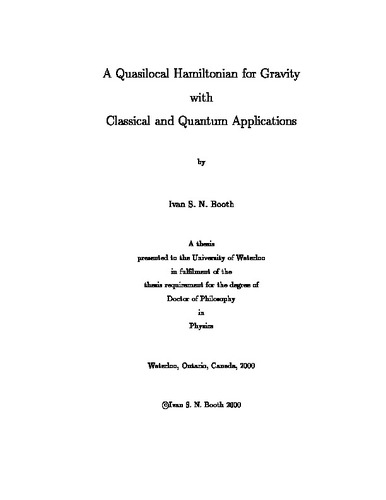 I modify the quasilocal energy formalism of Brown and York into a purely Hamiltonian form. As part of the reformulation, I remove their restriction that the time evolution of the boundary of the spacetime be orthogonal to the leaves of the time foliation. Thus the new formulation allows an arbitrary evolution of the boundary which physically corresponds to allowing general motions of the set of observers making up that boundary. I calculate the rate of change of the quasilocal energy in such situations, show how it transforms with respect to boosts of the boundaries, and use the Lanczos-Israel thin shell formalism to reformulate it from an operational point of view. These steps are performed both for pure gravity and gravity with attendant matter fields. I then apply the formalism to characterize naked black holes and study their properties, investigate gravitational tidal heating, and combine it with the path integral formulation of quantum gravity to analyze the creation of pairs of charged and rotating black holes. I show that one must use complex instantons to study this process though the probabilities of creation remain real and consistent with the view that the entropy of a black hole is the logarithm of the number of its quantum states.