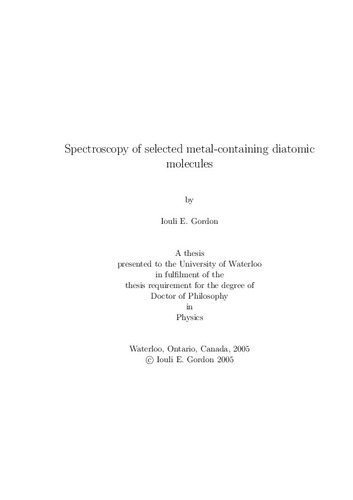 Fourier transform infrared emission spectra of MnH and MnD were observed in the ground <em>X</em><sup>7</sup>&sigma;<sup>+</sup> electronic state. The vibration-rotation bands from <em>v</em> = 1 to 0 to <em>v</em> = 3 to 2 for MnH, and from <em>v</em> = 1 to 0 to <em>v</em> = 4 to 3 for MnD were recorded at an instrumental resolution of 0. 0085 cm<sup>-1</sup>. Spectroscopic constants were determined for each vibrational level and equilibrium constants were found from a Dunham-type fit. The equilibrium vibrational constant <em>&omega;<sub>e</sub></em> for MnH was found to be 1546. 84518(65) cm<sup>-1</sup>, the equilibrium rotational constant <em>B<sub>e</sub></em> was found to be 5. 6856789(103) cm<sup>-1</sup> and the equilibrium bond distance <em>r<sub>e</sub></em> was determined to be 1. 7308601(47) Å. <br /><br /> New high resolution emission spectra of CoH and CoD molecules have been recorded in the 640 nm to 3. 5 <em>µ</em>m region using a Fourier transform spectrometer. Many bands were observed for the <em>A</em><sup>'3</sup>&phi;-<em>X</em><sup>3</sup>&phi; electronic transition of CoH and CoD. In addition, a new [13. 3]4 electronic state was found by observing the [13. 3]4- <em>X</em><sup>3</sup>&phi;<sub>3</sub> and [13. 3]4-<em>X</em><sup>3</sup>&phi;<sub>4</sub> transitions in the spectrum of CoD. Analysis of the transitions with &delta;&omega; = 0, ±1 provided more accurate values of spin-orbit splittings between &omega; = 4 and &omega; = 3 components. The ground state for both molecules was fitted both to band and Dunham-type constants. The estimated band constants of the perturbed upper states were also obtained. <br /> <br /> The emission spectrum of gas-phase YbO has been investigated using a Fourier transform spectrometer. A total of 8 red-degraded bands in the range 9 800 ? 11 300 cm<sup>-1</sup> were recorded at a resolution of 0. 04 cm<sup>-1</sup>. Because of the multiple isotopomers present in the spectra, only 3 bands were rotationally analyzed. Perturbations were identified in two of these bands and all 3 transitions were found to terminate at the <em>X</em><sup>1</sup>&sigma;<sup>+</sup> ground electronic state. The electronic configurations that give rise to the observed states are discussed and molecular parameters for all of the analyzed bands are reported. <br /><br /> Electronic spectra of the previously unobserved EuH and EuD molecules were studied by means of Fourier transform spectroscopy and laser-induced fluorescence. The extreme complexity of these transitions made rotational assignments of EuH bands impossible. However, the spin-spin interaction constant, &lambda;, and Fermi contact parameter, <em>b</em><sub>F</sub>, in the ground <em>X</em><sup>9</sup>&sigma;<sup>-</sup> electronic state were estimated for the <sup>151</sup>EuH and <sup>153</sup>EuH isotopologues. <br /><br /> Electronic spectra of SmH, SmCl, TmH and ErF molecules were recorded for the first time using Fourier transform spectrometer. The poor signal to noise ratio of the observed bands coupled with their complexity prevented a rotational analysis. The electronic states that may be involved in the observed transitions are discussed.