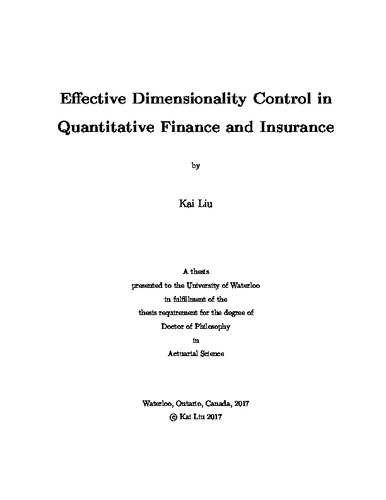 It is well-known that dimension reduction techniques such as the Brownian bridge, principal component analysis, linear transformation could increase the efficiency of Quasi-Monte Carlo (QMC) methods. Caflisch et al. (1997), who introduced two notions of effective dimension known as superposition dimension and truncation dimension, in part explain the overwhelming success of these methods for high-dimensional finance applications. By exploiting dimension reduction in QMC, we propose a new measure of effective dimension which we denote as the delta dimension. Unlike the previously proposed effective dimensions, it is easy to compute delta dimension, including its dimension distribution. We also propose a new dimension reduction technique known as the directional control (DC) method. By assigning appropriately the direction of importance of the given function, the proposed DC method optimally determines the generating matrix used to simulate the Brownian paths. Because of the flexibility of our proposed method, it can be shown that many of the existing dimension reduction methods are special cases of our proposed DC method. Furthermore, considering the functions with multiple discontinuities or differentiabilities, we propose a severity measure that allows us to identify the relative importance of the various sub-functions, which allows us to dynamically construct the optimal path generation method. By exploiting dimension reduction techniques in portfolio of insurance contracts, we propose a real-time evaluation model, i.e. Green-mesh, to select smaller number of synthetic representative points. We show that our pre-computed values could be recycled for evaluating incoming contracts. Unlike the general machine learning method, our green-mesh real-time evaluation model only takes a little computing at time 0, and achieves much higher accuracy. By exploiting dimension reduction techniques in portfolio selection, we propose an Effective Portfolio (EP) model to select smaller number of stocks in portfolio selection and uniquely determine the weights of selected stocks. We propose so called effective portfolio. We show that only certain portion of stocks dominant the whole market in which we define the number of effective stocks as EPD. Unlike randomly selected stocks, our EPD is a counting random variable with corresponding probability mass function, and it can be shown that a better portfolio alpha and beta trade-off based on a sophisticated strategy could be achieved via dimension reduction.