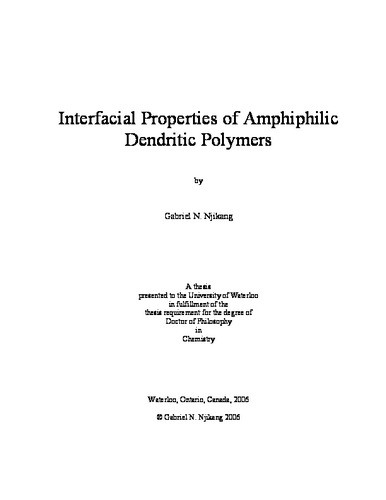 The self-assembly behavior of arborescent polystyrene-<em>graft</em>-poly(ethylene oxide) copolymers (PS-<em>g</em>-PEO) at the air-water interface and the solubilization/release properties of arborescent polystyrene-<em>graft</em>-poly(2-vinylpyridine) (PS-<em>g</em>-P2VP) copolymers were investigated. These amphiphilic dendritic molecules are covalently bonded unimolecular micelles incorporating a highly branched hydrophobic polystyrene core surrounded by a hydrophilic poly(ethylene oxide) or poly(2-vinylpyridine) shell. Molecules of PS-<em>g</em>-PEO copolymers spontaneously formed supramolecular assemblies at the air-water interface. The type of superstructures formed was found to depend upon copolymer composition, while the level of association was more directly related to the branching density of the polymers. At low surface pressures the PEO segments apparently remained adsorbed on the water subphase, but desorbed into water at very high surface pressures, in the condensed monolayer state. Controlled degradation of the PEO chains with UV light greatly enhanced molecular association, resulting in the formation of either large clusters or long ribbon-like superstructures. The PS-<em>g</em>-P2VP copolymers were found to efficiently solubilize and release hydrophobic small molecules in aqueous media. The partition coefficient and solubilization capacity of the copolymers for hydrophobic polyaromatic hydrocarbons increased with the polystyrene content of the copolymers, while the rate of solubilization decreased with increasing branching functionality of the copolymers. The release profiles for two model drugs displayed an initial burst in release followed by gradual approach to equilibrium. The diffusion coefficients of the drugs in the micelles increased with the branching functionality and the generation number of the micelles, presumably due to increased electrostatic repulsions of the protonated vinylpyridine units.