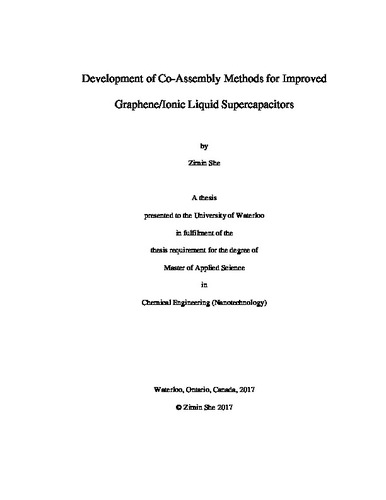 Supercapacitors, also known as electric double-layer capacitors or ultracapacitors, store energy by rapid and reversible rearrangement of ions/charges at the electrolyte/electrode interface. This physical process results in various advantages, such as high power density and long lifespan. However, compared to batteries, supercapacitors still have significantly lower energy density. Currently, great efforts focus on pursuing the efficient combination of high specific surface area (SSA) electrodes and electrolytes with wide working voltage windows. Hence, graphene-based materials have attracted considerable interest due to their high electrical conductivity and theoretical SSA, they are promising candidates for electrochemical double-layer capacitors (EDLCs) as next-generation energy storage devices. The objective of this work is to develop new electrode fabrication methods to improve the performance of reduced graphene oxide (rGO) based supercapacitors. Since specific capacitance is proportional to the SSA, the main challenge for rGO based supercapacitors is to effectively prevent rGO sheets from restacking when processed into a dense, thick electrode. In the first part, a hydrophobic ionic liquid (IL), 1-ethyl-3-methylimidazolum bis(trifluoromethyl-sulfonyl)imide (EMImTFSI), is used as both electrolyte and spacer to separate the graphene sheets and maintain its high SSA. It is demonstrated that EMImTFSI has better chemical stability than 1-ethyl-3-methylimidazolium tetrafluoroborate (EMImBF4), which was used in our previous work, and reduces the corrosion of commonly used current collectors (e.g. Al, Cu). To imbibe IL prior to thermal reduction, a graphene oxide/IL dispersion was used to assembly gel-like laminated nanocomposite on common metal current collectors. To balance the loss of IL and the reduction of GO, GO/IL electrodes were reduced by ramping up from room temperature to 360 ºC at 5 ºC/min followed by rapid cooling. The resulting conductive films containing 80 wt% of EMImTFSI displayed a good gravimetric capacitance of 135 F/g at 5 mV/s. The above work did not take advantage of any specific interactions between the IL and GO and thus some restacking likely occurred and limited the IL-accessible surface area. Therefore, the second half of this thesis focuses on engineering specific interactions between the GO and EMImTFSI to enable a more uniform distribution of IL among the network of GO sheets. This was achieved through an EMImTFSI aqueous microemulsion formed by the addition of the surfactant, Tween 20. Under a water rich condition (> 70 wt% water), this system became an IL-in-water microemulsion and displayed an average surfactant-stabilized IL droplet size of ~8 nm. In order to observe the interaction between microemusion nanodroplets and GO sheets, the fluorescence response arising from Tween 20 and rhodamine-b were used to probe adsorption through fluorescence quenching. A significant decrease in fluorescence intensity in the presence of GO indicated the spontaneous adsorption of stabilized IL onto the GO surface – likely via hydrogen bonding. Finally, this GO dispersion with uniformly adsorbed IL-containing microemulsion nanodroples was drop-casted onto Cu foil. The precursor electrode was reduced at 300 °C to release IL and remove Tween 20 leading to a dense and conductive layered rGO/IL film (0.76 g/cm3 of rGO), which exhibited record high gravimetric (302 F/g) and volumetric capacitance (218 F/cm3). These results constitute the best performance of a graphene-based high voltage supercapacitor reported to date.