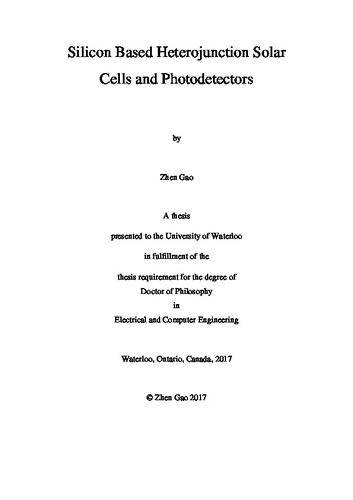 Solar energy is one of the most important clean and renewable energy options for fossil fuel replacement. Efforts have been placed on high performance and low cost solar devices for decades. Although the targets of high performance and low cost have been achieved separately, finding the sweet point between the two is challenging. Si based heterojunction device is one of the most promising technologies for achieving high performance and low cost at the same time. Currently, Heterojunction with Intrinsic Thin layer (HIT) solar cell is the most popular structure with intrinsic and highly doped a-Si:H thin films. It also holds the Si based single junction solar cell energy conversion efficiency record since 2014. However, two main constraints exist for such type of solar cells: 1. device performance is highly sensitive to the properties of intrinsic thin layer; any high temperature process can change the heterojunction behavior easily; 2. high cost Transparent Conductive Oxide (TCO) is included in the structure which has low temperature tolerance and therefore standard industrial metallization methods are not applicable for such devices. One possible solution to mitigate the disadvantages mentioned above is poly-Si/c-Si heterojunction structure. Poly-Si thin film is well-developed material which is much less sensitive to fabrication conditions. Poly-Si thin film fabricated by Low Pressure Chemical Vapor Deposition (LPCVD) has the advantages of relatively low thermal budget, high through put and high quality. Furthermore, the poly-Si thin film can be doped during deposition, which eliminates further high temperature diffusion or dopant activation processes. The conductivity of doped poly-Si thin film is reasonably high. Therefore, it is possible to eliminated the application of TCO layer. On one hand, bring down the material cost; on the other hand enable standard industrial metallization methods. Challenges exist on achieving high current output and high fill factor (FF) for poly-Si/c-Si heterojunction solar cells. Because, high current output requires thin poly-Si layer for better blue response, while high FF requires thick poly-Si layer for lower series resistance loss. In this research, an interface passivation layer and rapid thermal annealing process are analyzed and applied to achieve high current output and high FF at the same time. With non-textured planar solar cell, Jsc and FF of 29.37 mA/cm2 and 79.1% are achieved at the same time. Different types of Si based heterojunctions exhibit very different device behaviors. With the knowledge of Si based heterojunction analysis, the properties of Al-ZnO/Si heterojunction are analyzed in details. The superior junction properties of Al-ZnO/(n)Si over Al-ZnO/(p)Si structure are identified and explained in a systematic comparative study. The photoresponse mechanisms for Al-ZnO/Si heterojunction are explained and verified with experimental results. With the in depth understanding of Al-ZnO/(n)Si heterojunction structure, further modifications on the device are applied. Namely, thickness of Al-ZnO thin film is optimized and an interface passivation layer is applied. A high performance broadband photodetector is fabricated and presented with close to theoretical maximum responsivity for red color wavelength at self-powered mode.