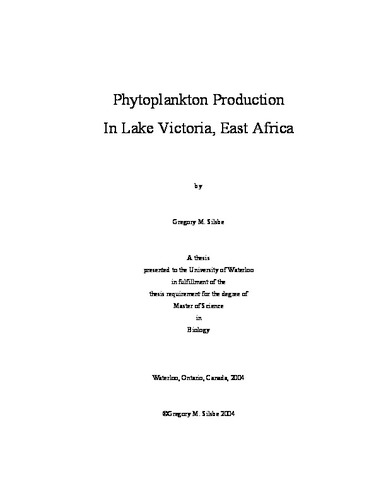 This thesis develops, validates and applies an empirical model that provides the first spatially explicit estimates of gross and net phytoplankton production in Lake Victoria. Gross and net phytoplankton production are in turn used to estimate the maximum sustainable yield (MSY) of Lake Victoria's fishery following an empirical formula and the carbon efficiency transfer method. Chapter 2 presents results from three inshore areas where diurnal and sub-seasonal gross and net phytoplankton production was derived using an adapted version of the phytoplankton production model developed by Fee (1990). Spatial and temporal trends of chlorophyll (chl), PI parameters, the vertical attenuation of PAR (kPAR), Secchi depths (SD) and respiration rates are identified. kPAR and SD are highly correlated to chl within the euphotic zone, as well as to each other. Furthermore, the two PI parameters, PBM and aB, exhibit a strong linear relationship and both decline along an increasing chl gradient, presumably due to increased light-limitation, a taxonomic shift from diatoms to cyanobacteria with increasing chl as well as an increased need for biologically fixed nitrogen. These hypotheses are supported by observed synchronous changes in the PSII:PSI ratio of phytoplankton and changes in the chl-specific attenuation of PAR (kchl). Relationships are also derived between biomass-specific respiration rates (RB) with chl and PBM; similar to PI parameters RB decreases with increasing chl. Owing to these correlative trends, only one parameter is required to estimate gross phytoplankton production through the empirical model developed in this thesis. The empirical model predicts that gross phytoplankton production increases in a near linear fashion between chl of 0 to 10 mg. m-3, begins to flatten out as chl approaches 20 mg. m-3 and then slightly decreases when chl exceeds 40 mg. m-3 where the maximum PPG of 13. 1 g O&#8322;. m-2. day-1 is reached and is in close agreement with a theoretical argument proposed by Talling (1965). Areal respiration and consequently net phytoplankton production are sensitive to chl within the mixed layer as well as mixed layer depths. Overall, the lakewide averages of gross and net phytoplankton production are 9. 68 and 2. 2 g O&#8322;. m-2. day-1 respectively. Significant temporal variability was observed on sub-seasonal scales within the inshore of Lake Victoria, and changes in limnological parameters coincided with changes in water column temperatures in each of the three bays. In Fielding Bay, the availability of meteorological data revealed that strong nocturnal wind events decreased both the water column temperature and chl, while both parameters generally increased in the absence of any such wind event. Lateral exchange of water with deeper areas through strong wind events essentially flushes Fielding Bay causing the observed decreases in both the water column temperature and chl; this hydrodynamic event also influences other limnological parameters according to their respective correlative regression equations with chl. Spatial trends were also observed between inshore areas. The deepest area, Napoleon Gulf, has the lowest values of chl while the shallowest area, Inner Murchison Bay, has the highest chl as the mean depth of a bay sets an approximate upper limit on chl. With respect to diurnal variability, PI parameters decline through the day, kPAR increases over the day and no statistically valid trends were ascertained for chl and RB. Chapter three examined spatial and seasonal patterns of chlorophyll fluorescence, temperature, dissolved oxygen and water transparency from four lakewide cruises. Significant spatial variability of each parameter confirmed that lakewide data is required to generate spatially explicit estimates of phytoplankton production. Complex patterns in the thermal structure during each cruise illustrated that physical processes in Lake Victoria are at times more complex that a previously stated unidirectional hypothesis of warm water in the north and cool water in the south (Spigel and Coulter 1996), and these patterns influence spatial patterns in dissolved oxygen and Secchi depths. Similar to Chapter 2, estimates of chl within the mixed layer were highly correlated to mixed depths, while lakewide averages of chl are lower than previously reported offshore values (Mugidde 1993, 2001).