Motives and Emotions behind Destructive Leader Behaviors towards Subordinates: A Supervisor Sensemaking Perspective 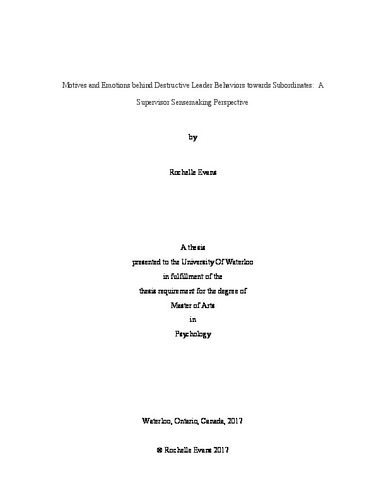 Causes of destructive leader behaviors – i.e., intentional leader actions that harm organizations or their members that are normatively perceived as deviant – have been investigated extensively from followers’ perspectives, while leaders’ perspectives – particularly how they engage in sensemaking around destructive incidents – have been neglected. Theory on attributions suggests that leader and follower perspectives on destructive leader behaviors are likely to be different, with leaders (more so than followers) being likely to make external, or situational, attributions for their destructive actions. Thus, this study uses an inductive approach that asks 338 leaders to report on their sensemaking activities regarding destructive incidents, specifically their motivations or explanations for engaging in destructive leader actions, as well as the emotions they experienced afterwards. Reported motives suggests that leaders make a variety of external attributions for their destructive behaviors, which suggests that leader bias in perspective may affect how they rationalize their actions, potentially enabling them to shift blame externally to the situation. As well, at least a third of emotions reported after the incident are neutral or positive, which suggests that a substantial minority of leaders may feel inclined or justified to engage in destructive behaviors toward their followers again.