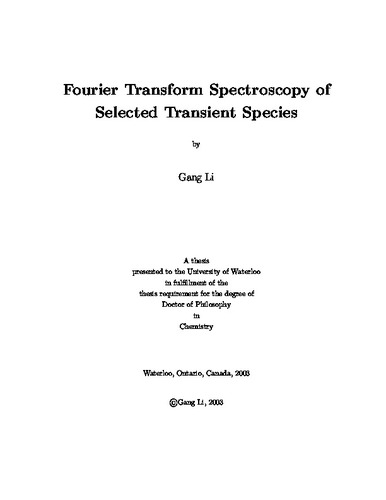 The procedures and results of experimental and/or theoretical studies of four transient molecules, GeO, WO, BeH, and MgH are reported in the thesis. Two of them, GeO and WO, are diatomic molecules composed of relatively heavy atoms, and the other two are diatomic molecules with hydrogen as one of their component atoms. The GeO species was generated using a high temperature furnace. The rovibrational spectrum of five isotopomers were detected in emission using a Bruker IFS 120 HR Fourier transform spectrometer. Combined-isotopomer Dunham-type molecular constants have been derived for GeO using the DSParFit computer program. Analysis shows that the Born-Oppenheimer approximation is valid, as expected, for a molecule containing heavy atoms. The WO molecule was generated using a microwave discharge cell, and the spectra of electronic transitions of various systems were detected in emission using both the Bruker IFS 120 HR Fourier transform spectrometer at Waterloo and the McMath Pierce One-Meter Fourier transform spectrometer at the National Solar Observatory in Arizona. The ground electronic state has been confirmed to be X³&#931;<sup>-</sup> based on the analysis of seven 0-0 bands. BeH and MgH are typical molecules with hydrogen as one of their component atoms, and the effects of Born-Oppenheimer breakdown were expected. Both of these molecules have rotational perturbations in their excited electronic states. A 'new' method of data processing was used, i. e. , treating the electronic data as if they were from fluorescence series. Thus the harmful influence of the perturbed upper electronic states on the ground electronic state molecular constants is eliminated. By using the DSParFit computer program, accurate sets of combined-isotopomer Dunham-type molecular constants have been derived for the ground electronic states of the two molecules, and Born-Oppenheimer breakdown correction terms have been obtained.