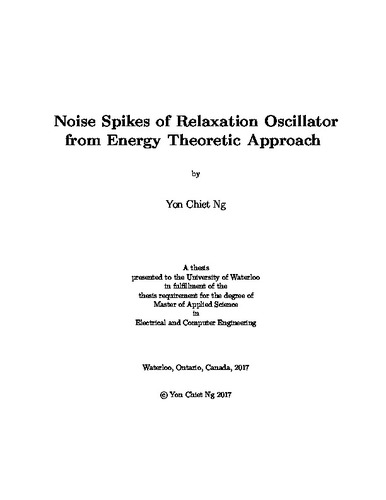 An energy theoretic approach to augment the existing noise model is proposed by including the cryogenic (down to 77K) behaviour of the noise spikes due to the regeneration process (when loop gain close to 1) of a relaxation oscillator. This noise model is useful in many time domain applications, e.g., design of Sigma-Delta Time-to-Digital Converter (TDC). The loop gain can be lowered towards 1 to increase the oversampling frequency, and subsequently reduce the quantization noise. The presented noise model tackles the noise spike problem from regeneration when loop gain close to 1. Three methods are used to obtain the noise model. The first method, a first attempt, is to identify the potential energy of the macroscopic behaviour of the Schmitt trigger (an integrated component of relaxation oscillators) with the underlying assumption that the system can be represented by one degree of freedom. Investigation on the dynamics of the Schmitt trigger shows a metastable state (maximum energy) and two stable states (minimum energy) which is due to the cross-coupled topology of the circuit. The limitation of this method is that it ignores the internal degrees of freedom i.e., the thermodynamic aspects appearing as temperature varies (decreases to cryogenic temperature). This limitation is then addressed in the second method by accounting for the different configurations in which these internal degrees of freedom manifest, resulting in the distribution of energy among the different configurations. The concept of free energy is introduced and from the free energy, the noise model obtained is now in function of temperature. As temperature drops further, quantum aspects start to arise. A third method is introduced as the temperature of the oscillator decreases and addresses the manifestation of quantum mechanical effect (at low temperature limit) with the assumption that the system is represented by one degree of freedom (macroscopic behavior), but with internal degrees of freedom represented by the immersion of the system in a heat bath with many degrees of freedom. The model for this method agrees with the second method when the loop gain is close to 1 at high temperature limit, thus giving us the confidence for the counterpart noise model at low temperature limit, where the quantum mechanical effects show up. The experimental results of relaxation oscillators, designed and fabricated in 130nm CMOS technology, show two regions with different slopes: at higher temperature, the phase noise is consistent with the noise model prediction where the phase noise (from thermal noise) is proportional to √T; at lower temperature, the phase noise becomes relatively constant and the trend agrees rather well with noise model (quantum noise) at low temperature limit. By changing the regeneration time of the relaxation oscillator (doubling the aspect ratio of transistors), there is a shift of the crossover temperature of the two regions, which is as predicted by the noise model. Finally, a 1-bit Sigma-Delta TDC is designed, and fabricated, using the relaxation oscillator, and the measured functional operation of the TDC agrees with simulation.