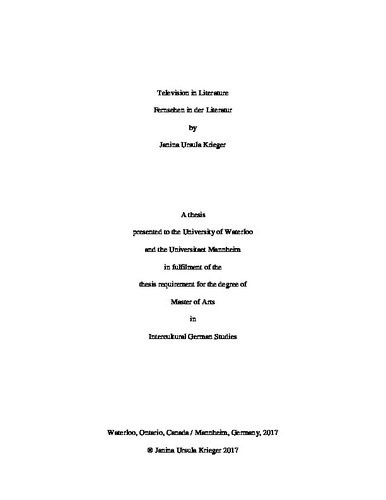 In this master thesis I discuss a topic which is highly neglected. We do see people reading all the time. When we see a person holding a book in his or her hands in the bus, we associate this person as being smart and educated as this person is not staring in his or her mobile phone. We also see actors reading a book in a movie, or talk shows about people discussing books, for example Das Literarische Quartett. There is a unclear amount of literary films, for example Das Buch der Vorleserin, Harry Potter and many more. But while reading a book yourself, one barely reads about a character watching television. There are many analyses and discussions about the importance of literature for television, but there is barely research about the role of television in literature. This thesis occupies this niche as it discusses the function of television in literature. In order to create a deeper understanding for the medium television, I reconstruct the history of television since the Second World War. I sum up technical advances and analyze its effect on the society, and how the human medium behavior changed over the past 50 years. I stop the reconstruction at the turn of the millennium as the rise of the internet revolutionised human media behavior, which opens a new field of research. I analyze the function of literature in four novels: Botho Strauß (1977): „Die Widmung“, Eckard Henscheid (1984): „Beim Fressen beim Fernsehen fällt der Vater dem Kartoffel aus dem Maul“, Matthias Zschokke (1982): „Max“, and Jean-Philippe Toussaint (2001): „Fernsehen“. These were the only novels I could find which mention a television in any matter. I studied the novels and scrutinized every reference of television as an object and as an action, when a character was watching television. I analyzed the importance of the medium (television) or the action (watching television) for the story, the relationship between the characters and the medium, and between the narrator or author and the medium, and the connotation of the words, which described the scene. While I was considering the different circumstances of the time of origin of the novels, I summed up differences and similarities between the novels. Outstanding was the fact, that all four novels presented bad effects of the medium television and watching TV. In my last chapter I try to answer the question, why there are a few books, which mention a television in their story and why the narrator and/ or the author of the book is blackguarding television in all cases. I want to answer the question, if the answer lies in the never ending competition between literature and television. The duo literature and television has a difficult past filled with periods of approximation and alienation, which I also reconstruct within the introduction. Is there a connection to the fact that the writers ignored television for years?