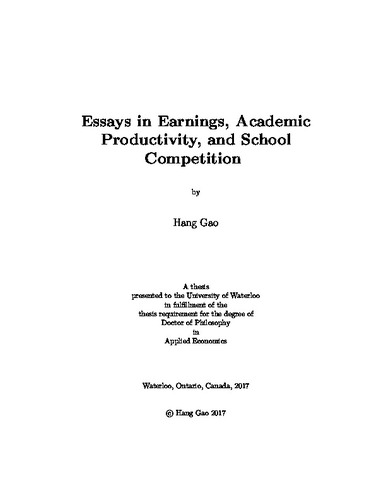 This thesis consists of three self-contained essays evaluating current issues in earnings, academic productivity, and school competition. The first chapter, coauthored with Anindya Sen, looks at returns to post-secondary education and the gender gap in Ontario. We construct a unique individual level panel dataset consisting of earnings of public sector employees of the Government of Ontario, facilitated by the Ontario Salary Disclosure Act which reveals earnings of $100,000 or more. Individual earnings from 2005-2013 were merged with publicly available profiles on www.linkedin.com, which contains details on educational attainment, field of study, job experience, and specific occupation. There are significant field specific differences in returns to post-secondary education. In terms of graduate education, on average, while Ph.D.'s earn a premium relative to undergraduates, there is a modest gender gap in earnings of doctoral degree holders, which is not present among undergraduates. The sample period also experienced significant salary increases for female undergraduates. However, there are significant gender differences in the proportion of individuals who are managers and also in earnings of senior managers belonging to early cohorts. By creating and utilizing a unique panel data from several different sources including the Ontario Ministry of Finance, EconLit, Web of Science, Online CVs, and so forth on all tenured and tenure track professors in 16 Ontario economic departments over 1996 to 2012, the second chapter intends to analyze the pay and position of those professors to see how co-authorship affect an economist's research productivity and how research productivity impacts pay and promotion. The study demonstrates that there is a significant return to co-authored publications relative to solo-authored publications in Ontario universities. The investigation of the relationship between co-authorship and productivity reveals that co-authored publications are associated with higher citation counts. Our research has also demonstrated that higher quality publications have a greater effect on salary, and the likelihood of promotion is positively associated with past performance. The estimates also suggest that some gender differences exist concerning the impact of co-authored publications on the likelihood of promotion. Finally, we find that in Ontario, economists are more likely to co-author with their colleagues,who have the similar ability, experience, and research interest. We found no gender-sorting effect among Ontario economists. In the last chapter, I use a data set obtained from the Ontario Ministry of Education and the Educational Quality and Accountability Office (EQAO) to estimate whether average school performance is affected by competition from other nearby schools. The availability of data on a panel of schools allows me to control for the potentially confounding effects of unobserved school specific attributes. I employ fixed effects, random trend and Instrumental Variables estimation to eliminate the potential simultaneity bias associated with competition between schools. Following Gibbons, Machin and Silva (2008), I use proximity to school board boundaries as an instrumental variable for local school competition. IV estimates suggest a statistically insignificant association between school competition and school performance. Another important finding is that the estimated coefficient is stronger when the sample is restricted to the Toronto District School Board, which may suggest that competition may improve school performance where students are given more freedom to choose their school. This finding may lend support to the current policy which is designed to improve public school performance in Ontario.