Fate and Transport of Naphthenic Acids in Glacial Aquifers 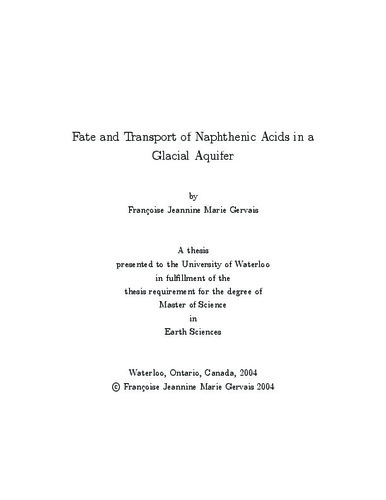 Naphthenic acids (NAs) are carboxylated alkanes and cycloalkanes concentrated in wastewater during oil sands processing. The general chemical formula is C{n}H{n+Z}O{2}, where n represents the number of carbon atoms and Z specifies a homologous family with 0-6 rings (Z=0 to Z=-12). The wastewater is acutely toxic to surface water organisms and is stored in tailings ponds with over 230 million m³ of fines tailings and free water. The purpose of this thesis was to provide a preliminary evaluation of the potential attenuation of NAs during groundwater flow from the ponds. Laboratory studies were conducted to evaluate possible attenuation mechanisms. Aerobes from aquifer material degraded 60% of the NAs over 20 weeks in laboratory microcosms. The greatest decrease occurred in the low molecular weight bicyclic homologues with 12 to 16 carbons. The microbial activity confirms that aerobic naphthenate-degrading bacteria occur naturally in the glacial aquifer near Suncor's Pond 2/3. These results support the hypothesis that limited aerobic biodegradation of the smaller components of NAs could occur relatively rapidly under field conditions. There was no measurable decrease in NA concentration over six months in anaerobic microcosms, although microbial activity did lead to sulfate-reducing and methanogenic conditions. The theoretical retardation in glacio-fluvial sands was calculated using soil-water partitioning coefficients (K{d}) determined by batch equilibration experiments using a mixture of naturally occurring naphthenic acids as well as the nine surrogates. The retardation (porosity of 0. 3, bulk density of 1. 5 g/mL) ranged from 1. 2 to 2. 6. However, no measurable sorption was seen at the field sites. Detailed characterization allows us to examine how the proportions of homologue, or groups of molecules with the same molecular weight and number of cycloalkane rings, vary. Aerobic biodegradation favoured removal of low molecular weight NAs. A 15% mass loss attributed to sorption caused no changes in the 3D signature. Thus, changes in NA "signature" in groundwater systems were then attributed to aerobic biodegradation. Three plumes were examined for evidence of attenuation of NAs via biodegradation. First, the individual samples were classified as background, possibly process-affected or process-affected using a combination of Piper diagrams, the stable isotopes oxygen-18 and deuterium, dissolved chloride and sodium, as well as the total naphthenic acids concentration. Second, in order to estimate attenuation due to dispersive dilution, a linear correlation line was drawn between various conservative tracers and the naphthenic acids concentration. This allowed the identification of certain samples as possibly having a lower concentration of NAs than could be expected from simple dispersive dilution. Third, the 3D signature of certain samples were examined for the presence of the aerobic biodegradation 3D signature. One site showed good evidence for aerobic biodegradation of naphthenic acids. A second site showed some evidence for biodegradation under methanogenic conditions but the evidence was not definitive. The evidence at the third site was contradictory and no conclusions could be drawn from it. This research suggests some attenuation of NAs by biodegradation may be possible during groundwater flow.