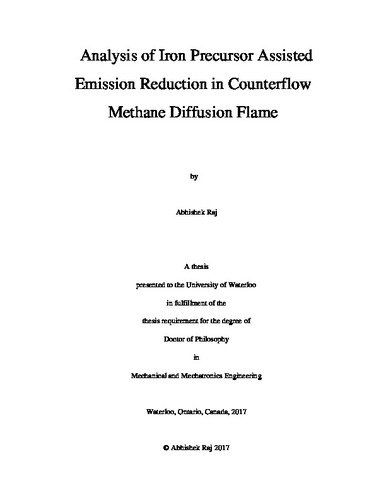 Addition of metallic precursors to flames draws interest due to their potential ability to catalyze hydrocarbon combustion by means of supplemental gas phase and surface reactions. A counterflow flame burner is utilized to spatially characterize and analyze the emissions from iron pentacarbonyl (Fe(CO)5) borne methane and ethanol combustion. Samples of the flue gases are obtained from these laminar and planar flames and are quantified using gas chromatography (GC) and Fourier-transform infra-red (FT-IR) spectroscopy, while solid particles are examined through x-ray diffraction (XRD). Measurements from ethanol and methane flames are compared and analyzed, in order to investigate the role of iron species derived from iron pentacarbonyl. Experimental data demonstrate a significant influence of the additive on combustion emissions, such as NO and soot precursors, in both flames. The addition of iron pentacarbonyl is found to be more effective in restricting soot precursors in methane flames (upto 90%) as compared to ethanol flames (90% in C2H2 while 10% in C2H6). The decline in NO is about 20%-30% under both the cases. An enhanced production of acetaldehyde in the ethanol flame is believed to result in changes of the emission profiles. This is followed by the numerical analysis of the previous experiments to determine the concentration, distribution and reaction rates of iron species, not measured in the experiments. The Computational Fluid Dynamics (CFD) model comprises of i) the burner geometry with a suitable mesh size; ii) governing equations addressing the conservation of mass, momentum , energy, species and; iii) reaction mechanisms governing the methane combustion (GRI 3.0), iron pentacarbonyl decomposition, iron clustering and iron oxides and hydroxide formation. The model is verified through literature data and compared against the experimental results. Sensitivity analysis is carried out to understand the influence of input parameters, such as the iron pentacarbonyl concentration and the fuel fraction on flame profile. The simulation results demonstrate a proportional decline in most C2 and NO species with increasing precursor concentration. The emission decline is found to demonstrate an initial increase with increasing fuel fraction, but is reversed beyond a certain value. As the heterogeneous catalysis processes, occurring on the surface of in-flame synthesized particles, also contribute to emission reduction, the particle evolution process, which governs the particle size and consequently the available specific surface area for catalysis, needs further exploration. Using counterflow burner configuration effectively simplifies the complex underlying physics behind the particle evolution process and provides ease of sampling. The last component of this thesis analyzes the particle evolution processes in a counterflow iron pentacarbonyl assisted methane diffusion flame. This is achieved by developing the experimental methodology for particle sampling and by analyzing the particle sampling results, with and without the iron precursor. Particles are sampled from various axial and radial locations of the flame by means of an orifice and are analyzed for the geometric mean particle diameter, mean particle concentration and the particle size distribution using a GRIMM Scanning Mobility Particle Scanner (SMPS). Different sampling orifice diameters are utilized in order to explore any particle loss during the sampling process. The results highlight various regimes of particle evolution: inception, surface growth and agglomeration to be dominant at various locations within the flame. The addition of iron precursor is found to result in an enhanced particle concentration but effectively reduces the mean particle size indicating enhanced presence of smaller particles.