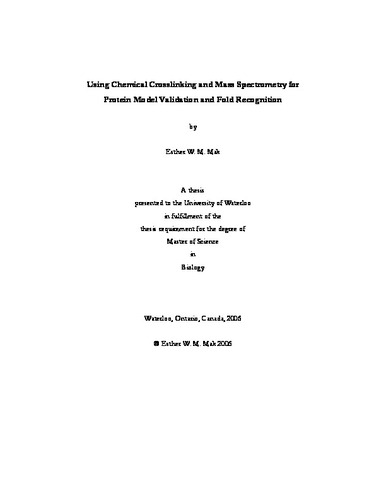 The 3D structures of proteins may provide important clues to their functions and roles in complex biological pathways. Traditional methods such as X-ray crystallography and NMR are not feasible for all proteins, while theoretical models are typically not validated by experimental data. This project investigates the use of chemical crosslinkers as an experimental means of validating these models. Five target proteins were successfully purified from yeast whole cell extract: Transketolase (TKL1), inorganic pyrophosphatase (IPP1), amidotransferase/cyclase HIS7, phosphoglycerate kinase (PGK1) and enolase (ENO1). These TAP-tagged target proteins from yeast <em>Saccharomyces cerevisiae</em> allowed the protein to be isolated in two affinity purification steps. Subsequent structural analysis used the homobifunctional chemical crosslinker BS<sup>3</sup> to join pairs of lysine residues on the surface of the purified protein via a flexible spacer arm. Mass spectrometry (MS) analysis of the crosslinked protein generated a set of mass values for crosslinked and non-crosslinked peptides, which was used to identify surface lysine residues in close proximity. The Automatic Spectrum Assignment Program was used to assign sequence information to the crosslinked peptides. This data provided inter-residue distance constraints that can be used to validate or refute theoretical protein structure models generated by structure prediction software such as SWISS-MODEL and RAPTOR. This approach was able to validate the structure models for four of the target proteins, TKL1, IPP1, HIS7 and ENO1. It also successfully selected the correct models for TKL1 and IPP1 from a protein model library and provided weak support for the HIS7, PGK1 and ENO1 models.