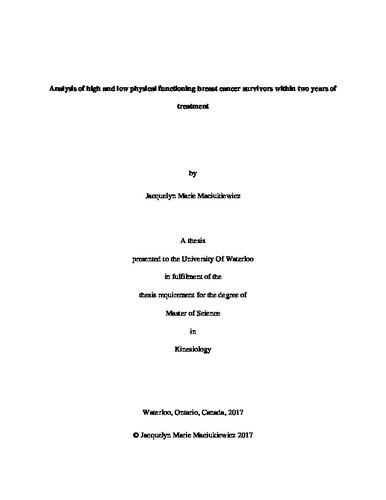 The five year survivorship rate of females diagnosed with breast cancer is 88% across Canada (Canadian Cancer Society, 2015). Often, treatments can cause damage to the tissue which may lead to impairment of upper limb function, specifically range of motion and strength. There have been several attempts to quantify these changes, but to inconclusive extents. This study investigated differences between breast cancer survivors with low and high self-reported physical functioning scores, differences between affected and unaffected limbs, as well as differences after 4 months of usual care. Ten female breast cancer survivors (between 3 months and 2 years post treatment) completed six maximal strength trials (flexion, extension, abduction, adduction, internal and external rotation) per limb and six maximal range of motion trials (flexion, extension, abduction, scapular plane abduction, and internal and external rotation), along with three questionnaires. Groups were split based on scores from the disability of arm, shoulder and hand (DASH) questionnaire. Maximal strength was compared for strength trials, and glenohumeral elevation was compared for range of motion trials. For both sets of trials, peak, median and static muscular activity was compared for high and low physical function scores as well as between affected and unaffected limbs. No differences were found between affected and unaffected limbs for either strength or range of motion. However, flexion, extension, abduction, and adduction strength were 32-52% higher in the group with higher self-reported physical functioning scores compared to the group with lower self-reported physical function scores. Correspondingly, internal rotation range of motion was 1.92 times higher in the group with higher physical function scores (effect size =1.98). The other five range of motion tasks (abduction, flexion, extension, scapular plane abduction and external rotation) were not statistically different between groups of high and low physical function scores but had moderate to large effect sizes (0.42-0.94). Several measures were correlated with DASH scores, indicating that increased strength and range of motion relate to self-reported physical functioning in breast cancer survivors. Between baseline and follow up, none of the six measured strengths changed, with only one of the six range of motion measures increased over the four month period. Extension range of motion increased by 112% during this period of usual care. Overall, this thesis provides insight into the period of time immediately following treatment. These variables had not been evaluated within the first two years of survivorship. Additionally, this work suggests breast cancer survivors are not a homogeneous group, and that function (range of motion and strength) differ. In previous literature, all outcomes are reported from one group and have been inconclusive. However this work shows that there may be a difference in survivors’ function. This can help refine future rehabilitation strategies as the deficits for these individuals can be quantified more accurately.