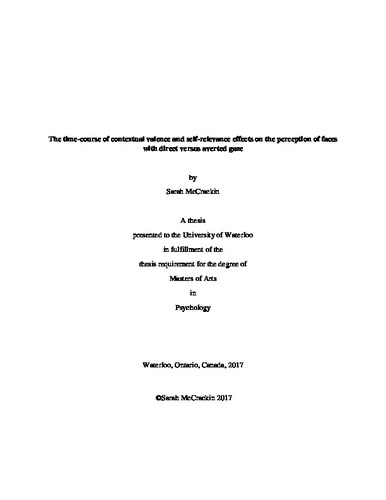 We see faces every day within a rich situational context. Previous ERP research has demonstrated that priming faces with contextual sentences varying in self-relevance and valence alters electrocortical and emotional responding to them, though the time-course of these effects is still unclear. It is also unclear if these effects interact with another cue that inherently contains emotional and self-referential information: whether or not the face is looking at the participant. We primed direct and averted gaze neutral faces (gaze manipulation) with emotional sentences to give them context. These sentences contained positive or negative opinions (valence manipulation) that the face held of the participants or of someone else (self-relevance manipulation). After reading each sentence, participants viewed the corresponding face and rated how positive or negative, and how affectively aroused, it made them feel. Eye-tracking enforced sentence reading and face fixation, while ERPs recorded at face onset tracked the time-course of when context and gaze effects interacted. Faces put into self-relevant contexts were more arousing than those in other-relevant contexts, and elicited different ERP waveforms just 150ms post-face, earlier than previously reported. This self-relevance effect was modulated by valence at both the behavioural and ERP level. Finally, faces put into positive self-referential contexts elicited different N170 ERP amplitudes depending on gaze direction, interacting during the time window thought to reflect the structural encoding of the face. These findings were paralleled in our behavioural measures, where positive self-referential faces made participants feel more positive if they had direct rather than averted gaze. These results indicate that the contextual cues of self-relevance and valence impact early visual perception of neutral faces in a complex and nuanced manner, interacting with gaze direction. They emphasize the importance of studying the effect of gaze cues on face perception within context mimicking the complexities of real world interactions.

Sarah D. McCrackin (2017). The time-course of contextual valence and self-relevance effects on the perception of faces with direct versus averted gaze. UWSpace. http://hdl.handle.net/10012/12265