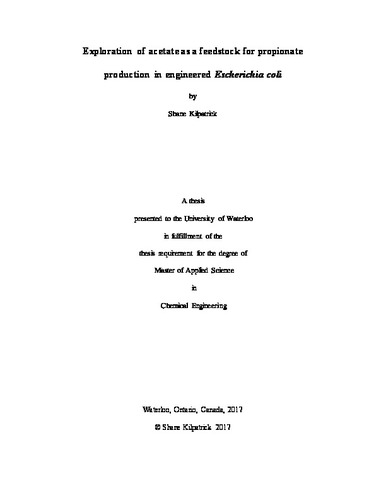 With a relatively low reductance, acetate is considered as a poor and uncommon carbon source for microbial production and, therefore, the production strains will require major strain engineering for effective utilization of it. In this study, using our previously derived propionogenic (propionate-producing) bacterium Escherichia coli, we successfully demonstrated the production of propionate with acetate as the sole carbon source. A selection of genes involved in the relevant biotransformation pathways were manipulated, either knocked out or overexpressed, and these genetic effects on culture performance, specifically cell growth and propionate yield, were investigated. Our results show that acetate metabolism is sensitive to perturbation of the central metabolic pathways and the majority of engineered strains had lower rates of acetate utilization and cell growth relative to the control strain. For effective conversion of acetate to propionate, potential metabolic strategies should be developed towards manipulation of the genes enhancing the oxidative tricarboxylic acid (TCA) cycle and glyoxylate bypass so that more dissimilated carbon flux can be driven into the methylmalonyl-CoA (MM-CoA) pathway. Potential applications of acetate as a feedstock for biomanufacturing are described.