The Effects of Collagen Rehydration on Postmortem Fracture Morphology: Implications for the Perimortem Interval 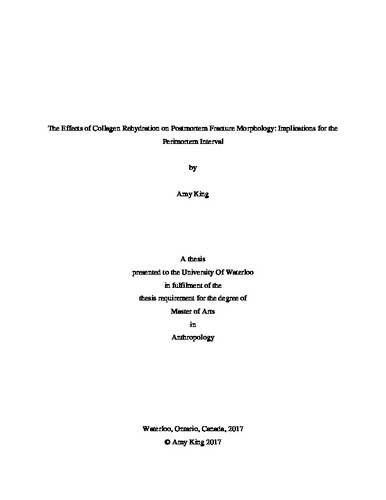 The purpose of this thesis was to explore the effect of water saturation on the fracture morphology of dry bones – specifically, this research sought to determine if rehydrating dry bones would cause skeletal material to fracture in a manner similar to fresh bones. This question has important implications for the interpretation of bone trauma, yet no previous studies have explored this topic. To answer this question, samples of dry faunal bones were soaked in water until they reached maximum saturation and then they were broken with a bone fracture apparatus. The fractures produced on these rehydrated bones were later compared to those produced on both dry bone and fresh bone samples to determine if there was any significant change in the biomechanical behaviour of the rehydrated group. The results of the analysis showed that the rehydrated flat bones were more likely to fracture in a manner consistent with the fresh bone group for some fracture traits (e.g. number of fragments produced, fracture angle, incomplete fracturing). Among the sample groups that consisted of highly-weathered remains, there was very little significant difference between bones that were broken while dry and bones that were broken after being rehydrated. These results suggest that water saturation may affect fracture morphology in dry bones provided at least some of the bone’s organic components (i.e. collagen) have been preserved. The significant degree of overlap between the sample groups underscores the problem of estimating the timing of traumatic events on skeletal elements based on discreet categories such as “perimortem” and “postmortem”. Anthropologists should consider adopting a system that describes bone trauma with regard to the state of the material at the traumatic event (i.e. wet or dry) and within the context of the depositional environment.