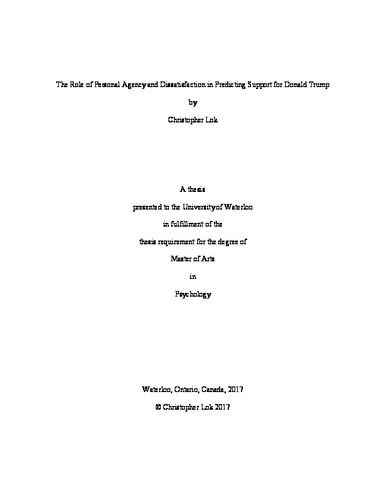 In his bid for the Presidency, Donald Trump marketed himself as the true voice of the people and as the sole leader who could restore America’s greatness. This approach is reminiscent of reactionary populist movements, which have been shown historically to attract “authoritarians”, that is, the dissatisfied and personally insecure who look to a powerful leader to vicariously fulfill their desires. More recent psychological research suggests, however, that another group of supporters may also be drawn to such movements. This “dominance-seeking” group is instead characterized by strong desires to attain status and power for themselves and their ingroups. In two studies conducted in the lead up to 2016 Presidential election, I measured White male, American participants’ levels of personal agency and satisfaction with social issues as predictors of support for Donald Trump’s campaign. My findings show that high agency and low satisfaction predicted the strongest support for Trump, suggesting that his most ardent supporters fit the profile of the dominance-seeking group as opposed to the more historically identified authoritarian group. These findings highlight the importance of considering multiple perspectives when it comes to characterizing political movements and their motivations.